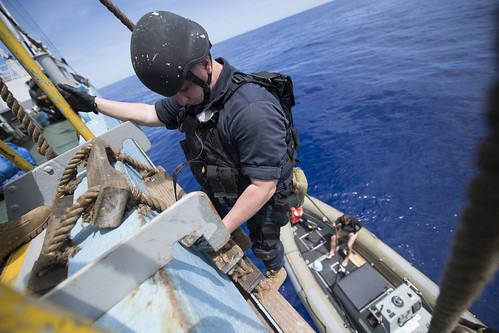 “While OMSI is an operational mission in nature, its execution has vast strategic implications for the Oceanic region,” said Cmdr. Robert A. Heely Jr., commanding officer of Michael Murphy. “Our patrol reinforced our strong support to the security and economic prosperity of the Pacific Island Nations.”

Five of the boardings were conducted on the high seas under the Western and Central Pacific Fisheries Commission guidelines with zero violations, while the other 11 were conducted in the exclusive economic zones (EEZ) of Tuvalu and Nauru, with no violations in either zone.

“Like our forefathers who sailed these waters years ago, the U.S. Navy and Coast Guard partnership remains a formidable maritime force,” said Heely. “We enjoyed working alongside the U.S. Coast Guard as well as the National Oceanic Atmospheric Administration, Foreign Fisheries Agency and our partners from Tuvalu and Nauru. It was a true team effort, and I am proud of team Murphy’s resilience and professionalism in accomplishing the mission.”

Boarding teams inspected documentation and fish holds for illegal activity and for compliance with conservation and management measures. Coast Guard teams and ship riders from Pacific Island Nations routinely conduct joint boardings within the host country’s EEZs to protect the ocean and the living marine resources within.

The Coast Guard is responsible for patrolling the waters around numerous islands associated with the United States throughout the region. Each of these islands have territorial waters stretching out to 12 nautical miles from shore.

Beyond that, extending out to 200 nautical miles is an EEZ, an area defined by international law that allows each nation exclusive rights to the exploration and use of the marine resources within. Oceania contains 43 percent, or approximately 1.3 million square miles of United States’ EEZs.

With the conclusion of OMSI, the ship will continue operations in the Indo-Asia-Pacific region as part of the Carl Vinson Strike Group. U.S. Navy carrier strike groups have regularly patrolled the Indo-Asia-Pacific for more than 70 years and will continue to do so. Carl Vinson has deployed to the region several times, starting with a deployment to the Western Pacific in 1983, a year after commissioning. Most recently in 2015, Carl Vinson Conducted port visits and exercises with regional navies in the South China Sea.

Commissioned on October 6, 2012, USS Michael Murphy is named after former U.S. Navy SEAL Lt. Michael P. Murphy. Murphy was posthumously awarded the Medal of Honor for his heroic actions during Operation Red Wings in Afghanistan, June 28, 2005. Murphy was the first person to be awarded the medal for actions in Afghanistan and was the first member of the U.S. Navy to receive the award since the Vietnam War. 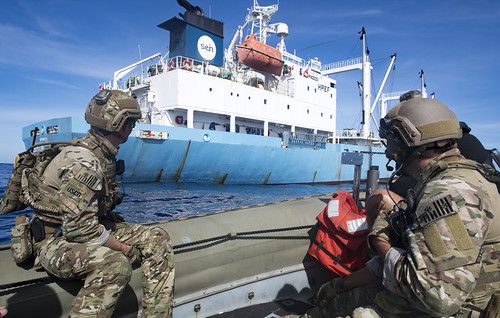 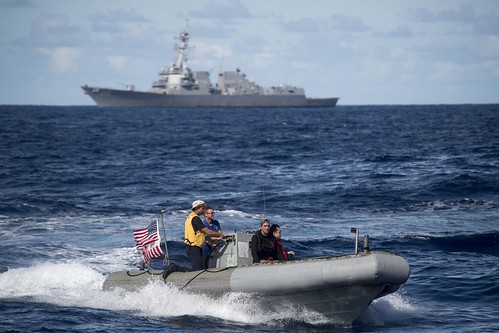