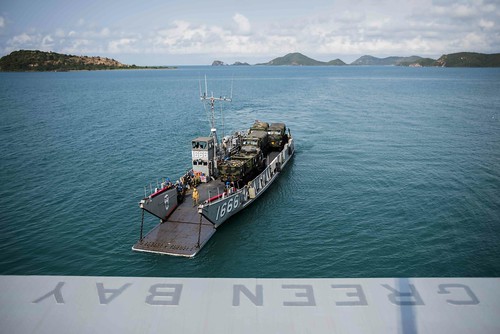 Throughout the exercise, Green Bay Sailors and Marines assigned to the 31st Marine Expeditionary Unit (MEU) worked alongside forces with the Kingdom of Thailand, United States, Singapore, Japan, Indonesia, Republic of Korea, and Malaysia in order to enhance multinational interoperability in the Pacific region.

"Multinational exercises like Cobra Gold are invaluable," said Capt. Nathan Moyer, Green Bay's commanding officer. "We take advantage of every opportunity to work with multinational partners. Cobra Gold provides us with an outstanding environment to enhance interoperability and to strengthen regional relationships."

This year's exercise consisted of three primary events: a staff exercise, humanitarian civic assistance projects, and a field training exercise. Up to 29 nations participated in CG17, with approximately 3,600 U.S. personnel directly participating both ashore and afloat.

During CG17, Green Bay Sailors and 31st MEU Marines demonstrated their ability to conduct multinational amphibious operations with partner nations throughout the exercise.

"Our Sailors performed magnificently," said Moyer. "The exercise was very complex and challenging, and it required a lot of flexibility and professionalism from everyone, but we pushed forward and met every mission requirement. Team Green Bay had a great exercise that we can be proud of."

Even though Green Bay was not at the opening ceremony, Green Bay Sailors helped kick off CG17 with a cultural exchange at the Wat Samnak Thon Elementary School, Feb. 14. During the event, 37 Green Bay Sailors, with Marines and Soldiers from participating commands, travelled to the school to interact with students ages 5-12.

"This event was important because we got to share our cultures and languages in order to embrace our similarities and differences to learn from one another," said Lt. Tiffany Eddy, Green Bay's command chaplain.

"The 31st MEU was extremely successful during this exercise," said Moyer. "The Marines who participated had an opportunity to see different tactics and techniques that the Kingdom of Thailand employs. By becoming more integrated and learning each other's tactics and procedures, we can operate better in any type of situation."

While the Marines participated in the field training exercise, Sailors were hard at work on Green Bay's flight deck, also known as Lambeau Field.

On Feb. 17, Royal Thai navy helicopters landed and took off from Lambeau Field for deck landing qualifications. This event provided training on both sides for the U.S. Sailors and Royal Thai navy pilots and aircrew.

"Even though this was my first time signaling to a Royal Thai navy helicopter, it was exciting being able to assist the pilots with their qualification," said Aviation Boatswain's Mate (Handling) Airman Amado Banosderrickson.

As a result of joint exercises such as Cobra Gold, military branches have had to cross-train with each other. Landing Army helicopters aboard a Navy ship such as Green Bay, although rare, is becoming more important as operations diversify.

"This training is a very unique opportunity to get a wide range of Army pilots deck landing qualified," said Lt. Cmdr. John Caldecutt, Green Bay's air boss. "We were privileged to give them the chance to gain proficiency in a skill set they rarely use."

Later in the evening, Feb. 22, Green Bay pulled into Sattahip, Thailand, to wrap up CG17. During the port visit, Green Bay visited with Royal Thai navy leaders and re-embarked elements and equipment of the 31st MEU which stayed on the beach.

Cobra Gold is an annual joint/coalition multinational exercise and is the latest in the continuing series of U.S.-Thai military exercises designed to ensure regional peace and stability. The U.S. has been treaty allies with Thailand for more than 180 years and formal treaty allies for more than 60 years.

Green Bay is on a routine patrol, operating in the Indo-Asia-Pacific region to enhance partnerships and be a ready-response force for any type of contingency.