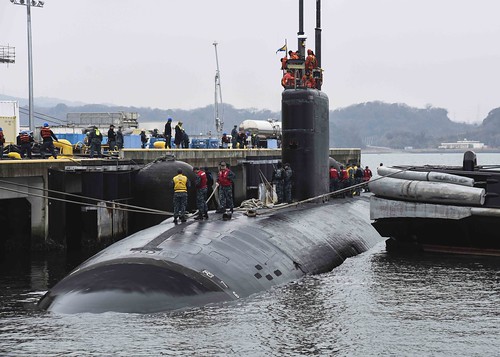 The visit strengthens the already positive alliance between the U.S. and Japan through the crew's interaction with the Japan Maritime Self-Defense Force. It also demonstrates the U.S. Navy's commitment to regional stability and maritime security in the U.S. 7th Fleet area of operations.

Santa Fe is optimistic about the opportunity for a port visit in Yokosuka and looks forward to strengthening the ties shared with close allies.

"Our crew has had the opportunity to meet our partner Japanese submarine crews that visit Pearl Harbor and are excited to visit their homeport," said Cmdr. Jacob A. Foret, commanding officer.

"The crew has worked tirelessly at training and preparing for the western Pacific deployment and are eager to explore the many sights and sounds of Yokosuka," said Master Chief Electronics Technician (Navigation) Jorge Perez, chief of the boat. "The crew has many first-timers who have heard so many interesting stories about Japan and look forward to experiencing the Japanese culture firsthand during this port visit. They joined the Navy to see the world, and this is their first foreign port visit."

Many crew members are excited to experience the rich culture of Japan.

Measuring more than 360 feet long and weighing more than 6,000 tons when submerged, Santa Fe is among the world's stealthiest platforms.

Santa Fe is homeported in Pearl Harbor and is assigned to Commander, Submarine Squadron 7. It is named after the great city of Santa Fe, New Mexico.