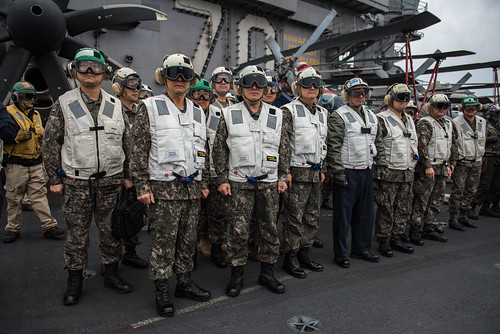 WATERS SURROUNDING THE KOREAN PENINSULA - The chiefs of staff for the Republic of Korea's Army and Air Force and the ROK chief of naval operations visited USS Carl Vinson (CVN 70) at sea, March 20, 2017.

Rear Adm. Brad Cooper, the commander of U.S. Naval Forces Korea, accompanied the senior leaders and said the visit was a milestone that can only benefit the alliance.

"This was a monumental opportunity for the U.S. Navy to highlight the capabilities an aircraft carrier can bring to the peninsula to the very ROK military leaders who can best use those capabilities," said Rear Adm. Brad Cooper, commander of U.S. Naval Forces Korea.

During the visit, the leaders met with Rear Adm. James Kilby, the commander of Carrier Strike Group (CSG) 1.

"Carl Vinson Strike Group is proud to call the Republic of Korea our partners, in the air and at sea, as we continue to build on a relationship that spans more than 60 years," said Kilby. "This visit is another example of the strength of that relationship and our combined commitment to learning from one another for the sake of the ROK and U.S. alliance.”

While aboard the ship, each guest learned about the history and mission of USS Carl Vinson and experienced the ship first-hand including observing launch and recovery flight operations on the flight deck.