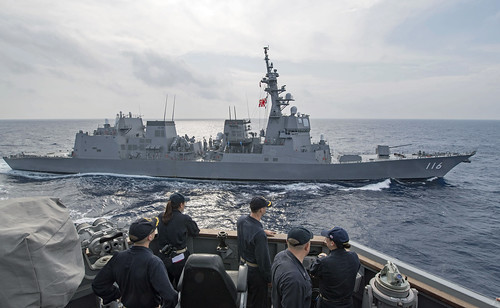 Both ships conducted multiple maneuvers around each other under the command of JMSDF Escort Division 6 Commodore, Capt. Masashi Kondo.

"It was a great experience for Michael Murphy to work alongside JS Teruzuki under the tactical control of the Escort Division 6 commodore," said Cmdr. Robert A. Heely, commanding officer of Michael Murphy. "This passing exercise demonstrated our link and communications interoperability, while also honing in on our shiphandling techniques during leapfrog maneuvering drills."

At the conclusion of the PASSEX, Heely was transported to Teruzuki in a rigid hull inflatable boat to meet with Kondo and the commanding officer of Teruzuki.

After a formal gift exchange and friendly conversation, Heely disembarked and returned to Michael Murphy.

"It was a tremendous honor to visit our counterparts on JS Teruzuki, especially after a successful exercise at sea," said Heely. "I enjoyed the opportunity, and it speaks volumes about the great friendship our maritime forces have developed through the years."

Prior to operations in the South China Sea, Michael Murphy, conducted training as part of the Carl Vinson Carrier Strike Group off the coast of Hawaii to improve readiness and cohesion as a strike group. Michael Murphy also conducted an 18-day joint mission with the U.S. Coast Guard in the Central and South Pacific under the Oceania Maritime Security Initiative (OMSI) to combat transnational crimes, enforce fisheries laws and enhance regional security.

U.S. Navy carrier strike groups have regularly patrolled the Indo-Asia-Pacific for more than 70 years and will continue to do so. Carl Vinson has deployed to the region several times, starting with a deployment to the western Pacific in 1983, one year after commissioning. Most recently in 2015, Carl Vinson Conducted port visits and exercises with regional navies in the South China Sea.

Commissioned Oct. 6, 2012, USS Michael Murphy is named after former U.S. Navy SEAL Lt. Michael P. Murphy. Murphy was posthumously awarded the Medal of Honor for his heroic actions during Operation Red Wings in Afghanistan, June 28, 2005. He was the first person to be awarded the medal for actions in Afghanistan and was the first member of the U.S. Navy to receive the award since the Vietnam War.

U.S. 3rd Fleet leads naval forces in the Pacific and provides the realistic, relevant training necessary for an effective global Navy. Third Fleet constantly coordinates with U.S. 7th Fleet to plan and execute missions based on their complementary strengths to promote ongoing peace, security, and stability throughout the entire Pacific theater of operations.