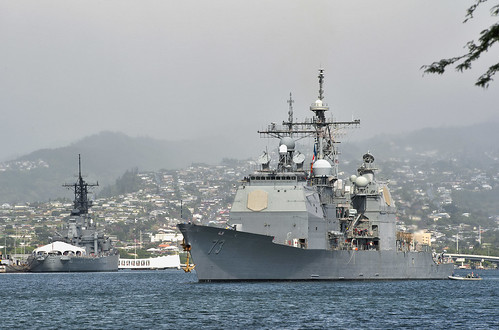 "Port Royal's 2016-2017 deployment was the culmination of the hard work that had been ongoing since the ship's last deployment. Port Royal's crew remained focused on getting their ship materially ready for operational excellence, which they demonstrated throughout their 2016-2017 deployment. The crew has lived up to the ship's motto, 'The Will to Win,' and they have never wavered in their support of the ship and its mission," said Capt. Adolfo H. Ibarra, Port Royal's former commanding officer.

Ibarra turned over command to Capt. Christopher J. Budde during an official change of command on Feb. 24 while the ship was operating in the Western Pacific. Budde echoed Ibarra's sentiments. "The Port Royal crew performed brilliantly throughout a seven month deployment spanning the 5th and 7th Fleet AORs. More impressive was the effort that went into certification and workups. Getting this ship prepared for its first deployment in five years was a Herculean task that required incredible work and dedicated deckplate leadership," said Budde.

"At the heart of it, our crew proved that our Sailors truly represent the best of America," said Hancock. "They have the hearts of lions and showed it daily under combat conditions. I am extremely proud of the work they have done for this nation. This ship returns to Pearl Harbor materially-sound and operationally ready. That is a testament to the leadership of my chiefs and officers, but above all, it reflects the tireless dedication of my Sailors to mission accomplishment. They have exuded excellence throughout this deployment, and because of their efforts, we return to our loved ones with our heads held high, undoubtedly the finest cruiser in the fleet."

Port Royal is homeported at Pearl Harbor and is part of Naval Surface Forces and U.S. 3rd Fleet.