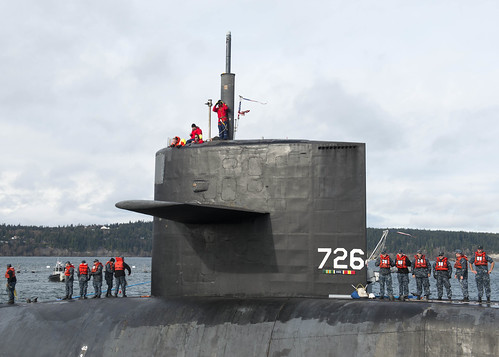 INDIAN ISLAND, Wash. - The guided-missile submarine USS Ohio (SSGN 726) returned home to the Pacific Northwest March 23, after being deployed for 20 months in the Pacific.

Since its departure in December 2014, Ohio was forward-deployed to Guam, where it conducted surveillance, training and other critical missions in the 7th Fleet area of operations.

“I thought that this was a successful deployment,” said Fire Control Technician 3rd Class Christopher Goetz, from Havertown, Pennsylvania, assigned to Ohio’s Gold Crew. “We worked really hard while deployed and trained just as much when we were the off-crew and it paid off. We achieved what we came to do.”

“I have been lucky enough to serve on the USS Ohio for a very long time, 11 years to be exact, and this is by far the best crew that I have ever worked with,” said Chief Fire Control Technician Shane Adkins, from Cuyahoga Heights, Ohio, assigned to Ohio’s Gold Crew. “During our two separate deployments, crew morale was the highest I have ever seen it. That helped the crew come together and work hard to successfully complete both missions on an aging boat.”

“There are much needed repairs that need to be done to allow Ohio to continue fulfilling its mission,” said Gold Crew’s Chief of the Boat Master Chief Aaron Lee, from Long Beach, California.

Ohio and its sister ship, USS Michigan (SSGN 727), are both homeported at Naval Base Kitsap-Bangor.