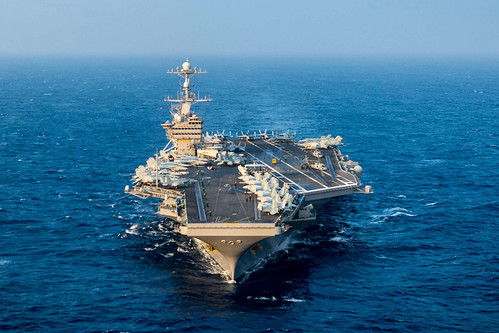 “Congratulations to USS John C. Stennis (CVN 74) and USS Harry S. Truman (CVN 75) for your selection as the 2016 Battle "E" Award winners,” wrote Shoemaker and Lindsey. “Additionally, congratulations to all departmental winners for your hard work and demonstrated superior performance. The Sailors and officers of these carriers should be proud of their efforts.”

John C. Stennis was selected for the Battle “E” for demonstrating operational excellence and superior achievement in a wide range of competencies throughout the competitive cycle.

The ship also needed to remain current in all inspections, certifications and assessments, as well as maintain a high-level of safety awareness and operational risk management during all shipboard operations throughout 2016.

The Battle “E” is presented by the respective type commander (TYCOM) to the aircraft carrier which has achieved the highest degree of battle readiness through sustained superior performance and operational effectiveness.

John C. Stennis is conducting a planned incremental availability (PIA) at Puget Sound Naval Shipyard and Intermediate Maintenance Facility, during which the ship is undergoing scheduled maintenance and upgrades.