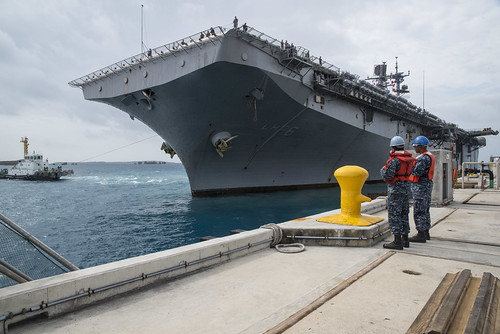 Bonhomme Richard departed Sasebo, Japan, for a regularly-scheduled patrol in the 7th Fleet area of operations, Feb. 27. During the patrol, Bonhomme Richard and the 31st MEU completed amphibious integrated training (AIT) and a certification exercise (CERTEX).

“I continue to be amazed by the professionalism and determination of our blue-green team,” said Capt. Jeffrey Ward, Bonhomme Richard’s commanding officer. “They flawlessly executed the mission, exceeding all expectations, and I couldn’t be more proud of this crew.”

CERTEX was conducted to evaluate the integration of all elements of the Bonhomme Richard Expeditionary Strike Group (ESG) and 31st MEU to test their ability to plan for and execute mission essential tasks.

“This patrol was extremely successful,” said Col. Tye Wallace, commanding officer of the 31st MEU. “We had a great time integrating with our naval partners. We were able to hone our skills as an afloat, amphibious crisis response force, and it allowed us to further strengthen the bonds of camaraderie between Bonhomme Richard and the MEU.”