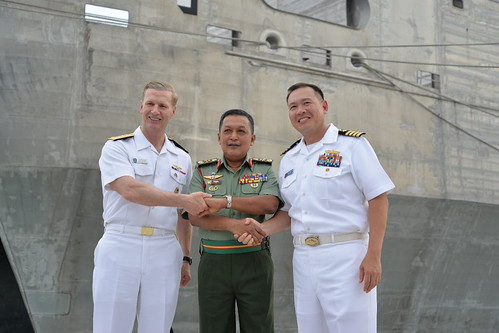 According to U.S. Army Maj. John Burns, Pacific Partnership 2017's officer in charge for Malaysia, this year's visit to Malaysia will not only provide an opportunity to build on the success of last year's mission, but will also provide unique challenges in comparison to other mission stops.

"The mission in Malaysia this year is unique because of its complexity," said Burns. "Our forces will be operating in both Peninsular Malaysia and in Sarawak State on the Island of Borneo. The planning and execution we're working through together with the Malaysian Armed Forces has been challenging, but is strengthening our two nations' ability to operate together in a complex environment."

During the mission, U.S., Australian, Japanese and Malaysian service members will work alongside one another in their respective fields.

"I know our personnel will come away with an appreciation for the professionalism of both our Malaysian military and civilian hosts," said Burns. "I also believe our Sailors, Marines and Soldiers will learn from the diverse cultures they'll experience both on the peninsula and in Sarawak."

Hospital Corpsman 2nd Class Shannen Cobb, the mission's pharmacy technician, said that those experiences are what she's most looking forward to during the mission.

"As a pharmacy tech, it can be hard to get out on missions and get an experience like this," said Cobb. "In Sri Lanka, it was eye opening working with people from another culture. From procedures to work ethic, to organization, working side by side allowed us to learn a lot from one another. I was grateful to be able to be a part of that, and I'm excited to work with the team in Malaysia."

Now in its 12th year, Pacific Partnership continues as the largest annual multilateral humanitarian assistance and disaster relief preparedness mission conducted in the Indo-Asia-Pacific and aims to enhance regional coordination in areas such as medical readiness and preparedness for manmade and natural disasters.