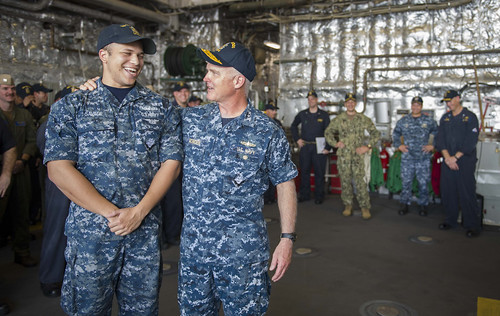 During the visit, Rowden toured the ship's engineering and main spaces while observing turnover between LCS Crew 203 and Crew 204, and held an all-hands call where he pinned four Sailors for recently achieved qualifications.

"It was an inspiring visit," said Rowden. "A ship deployed that length of time and still looks so good is a testament to how much those Sailors care about their ship. Incredible. The crew was very engaged and asked magnificent questions during [the] all-hands call, and displayed expert knowledge on their gear during the walk around."

In addition to visiting Coronado, Rowden met with Commander, Task Force 73, and Destroyer Squadron 7 leadership during his trip to Singapore.

The visit during crew turnover by the commander of Naval Surface Forces was appreciated by Coronado Sailors, according to Operations Specialist 2nd Class Arthur Ostrander, LCS Crew 204.

"LCS turnovers are very extensive and detailed to ensure the oncoming crew is properly qualified and ready to take the hull in order to fulfill the mission to the highest standards," said Ostrander. "It was nice that Vice Adm. Rowden was able to observe the work we are doing here."

The turnover is progressing as scheduled and both crews are working hard to ensure a safe and efficient turnover of the hull occurs. Crew 203 and 204 are the original Blue/Gold team, so there has always been a very high level of cooperation, coordination and respect between them.

"We are making maximum use of this time to ensure we provide the oncoming crew with a complete and thorough understanding of the ship's material condition, as well as its capabilities and limitations," said Cmdr. Scott Larson, commanding officer, USS Coronado. "We are fully committed to and invested in their success, and that has been a guiding principle throughout the turnover process."

Currently on a rotational deployment in the U.S. 7th Fleet area of responsibility, Coronado is a fast and agile warship tailor-made to patrol the region's littorals and work hull-to-hull with partner navies, providing 7th Fleet with the flexible capabilities it needs now and in the future.