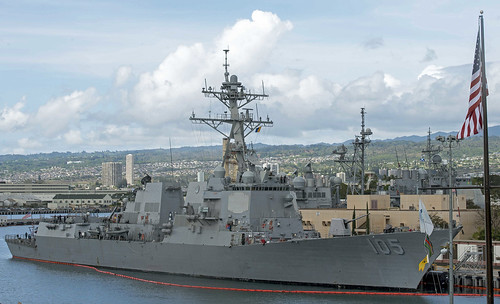 During the transit to Hawaii, the Sterett-Dewey SAG completed a series of training and certification exercises tailored to meet projected expectations of Western Pacific operations. The group additionally worked with Carrier Strike Group 11 in a series of communications exercises.

The Sterett-Dewey SAG will operate with regional navies to conduct routine patrols, maritime security operations and theater security cooperation activities to enhance regional security and stability in the Western Pacific.

U.S. 3rd Fleet will retain control of the Sterett-Dewey SAG as it crosses the international dateline. U.S. 3rd Fleet operating forward offers additional options to the Pacific Fleet commander by leveraging the capabilities of both the 3rd and 7th Fleets. This operational concept allows both numbered fleets to complement one another and provide the foundation of stability in the Indo-Asia-Pacific region.

“The Sterett-Dewey SAG has demonstrated exemplary technical and tactical proficiency and teamwork, giving this deployment a very strong start,” said Capt. David A. Bretz, commander, DESRON 31. “I’m extremely proud of the dedication and mission focus on display from every Sterett-Dewey SAG Sailor, and we are looking forward to putting these sharpened skills to use in support of maritime security and stability operations with our partners and allies in the Western Pacific.”