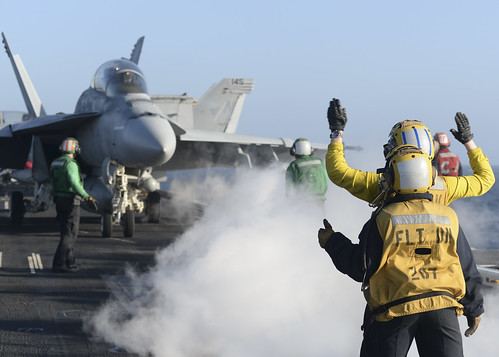 Blue Water Certification is one of the final qualifications a carrier and associated air wing must go through before being certified for deployment.

Earning this certification means that, from aviation maintenance to the launch and recovery process, Nimitz is capable of self-sustained flight operations, at sea. Without the qualification, the ship and air wing are required to operate within a 100-mile radius of a land-based air field in case of an emergency.

Nimitz was graded on several events, ranging from replacing arresting-gear wires, launching and recovering aircraft as quickly as possible, rigging up a mobile visual landing aid system, as well as the ability of the air wing to conduct in-air refueling before attempting a recovery on the flight deck.

“We had to be pretty precise and quick in launching the aircraft, recovering them, getting them out of the landing area, de-arming them and rotating to the next aircraft on time without any problems,” said Aviation Boatswain’s Mate (Handling) 3rd Class Michael Ingo, a native of Olathe, Kan., “It was a really smooth training cycle leading up to the qualification, and it was really satisfying to have been a part of the whole thing from start to finish.”

Nimitz has been working with some of the squadrons of CVW 11 since October of last year through sea trials, Tailored Ship’s Training Availability (TSTA) and Final Evaluation Problem (FEP).

COMPTUEX, which tests a carrier strike group's mission-readiness and ability to perform as an integrated unit through simulated real-world scenarios, is the first time Nimitz has operated with the full complement of CVW 11 in preparation for deployment.

“It’s important to get this certification, so we can prove we can launch and recover aircraft as quickly as possible,” said Air Traffic Controller 2nd Class Austin Witsken, a native of Grand Junction, Colo., and the Carrier Air Traffic Control Center (CATCC) assistant branch chief. “We want to be able to hide from the enemy when conducting operations, which means we have to complete our launches and recoveries as fast as possible so the carrier can continue to avoid any threats.”

This qualification is a very big step toward deployment in Nimitz’ condensed Inter-Deployment Training Cycle (IDTC) and required effort from Sailors all over the ship.

“Anyone who has a hand in flight operations was involved in this evolution,” said Cmdr. Corey Plocher, Nimitz’ air boss. “The air wings, maintainers and aircrew were all getting their birds into the air quickly. The handlers and directors on the flight deck had everyone stacked up efficiently to get aircraft into the air as quickly as possible. The bridge crew was keeping our nose pointed in the right direction to keep wind across the flight deck. The reactor department was giving power to the bridge to make it happen, it really was a team evolution.” 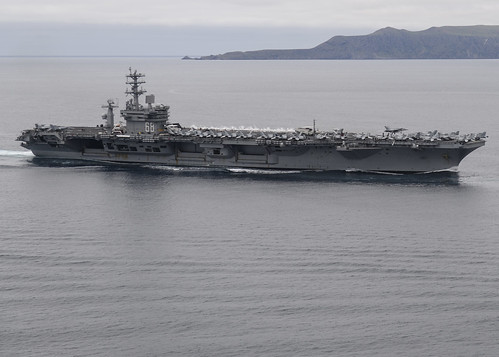