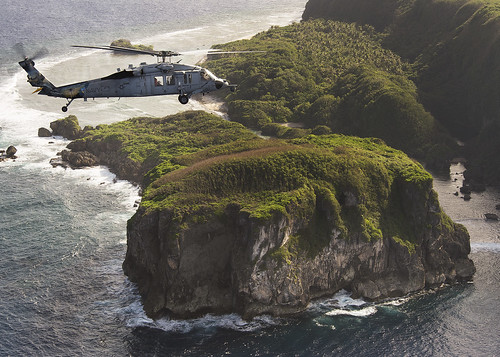 In this file photo, an MH-60S Sea Hawk helicopter assigned to HSC-25 operates off the coast of Guam. (U.S. Navy/MCC Joan E. Jennings)

After lowering the SAR swimmer and SMT, Navy personnel assessed and transferred the patient to a litter that could be lifted to the helicopter. Once transferred, the crew hoisted the patient onto Knight Rider 09 and transported him to Naval Hospital Guam for further transport to Guam Memorial Hospital to receive the critical care he needed.

“It is an honor to support the U.S. Coast Guard and Joint Region Marianas with a 24-hour SAR and MEDEVAC alert, and is a vital effort that directly translates into lives saved,” said Cmdr. William Eastham, HSC-25’s executive officer and the helicopter aircraft commander of the flight. “All our extensive training in all mission sets culminated in a tricky rescue over a small vessel in seven-foot rolling seas. Great credit to the entire HSC-25 team, including a robust maintenance effort to provide mission ready aircraft ready to respond.”

The mission of HSC-25 is to deploy detachments to conduct helicopter sea combat operations in support of 7th Fleet and national defense. In addition, the Island Knights provide logistics, SAR, force protection, and disaster response support to Guam and the Commonwealth of the Northern Mariana Islands.

As the Navy's forward-deployed naval squadron, HSC-25 actively contributes to the nation's maritime strategy efforts, which call for the security of America and its citizens, the application of sea power to ensure the protection of America's way of life and a strengthened partnership with allies.