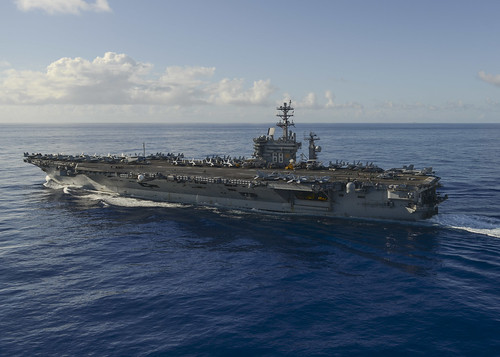 While operating on patrol in 7th Fleet, Nimitz is slated to enhance maritime partnerships and promote peace and stability in the Indo-Asia-Pacific region.

“Over the past eight months we have been in a pretty intense training environment, which culminated into just a superb performance during COMPTUEX (Composite Training Unit Exercise),” said Rear Adm. Bill Byrne, commander, CSG 11. “We’re looking forward to working closely with our allies and partners in the Indo-Asia-Pacific practicing the skills we gained and enhancing relationships within the region. I am so proud of our team. While expectations are high externally, they are even higher internally.”

Nimitz left its homeport of Bremerton, Wash., June 1. The ship joined with the aircraft of Carrier Air Wing (CVW) 11 and the ships from DESRON 9 June 5 and stepped through their final phases of training before arriving in 7th Fleet.

Nimitz’ last cruise to the Western Pacific was in 2013.

Nimitz Strike Group follows in the wake of countless ships, aircraft, Sailors and Marines that have deployed over the past 70 years, continuing the Navy’s ongoing commitment to maintain security and stability in the Indo-Asia-Pacific region.