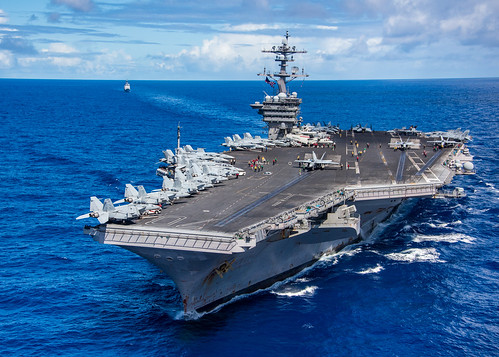 During the deployment, the strike group conducted operations with the Republic of Korea (ROK) Navy and the Japan Maritime Self-Defense Force consisting of visit, board, search and seizure drills, tactical maneuvering, flag hoisting drills, and air, surface and anti-submarine warfare training.

The strike group also participated in the maritime portion of Exercise Foal Eagle, a series of annual defense-oriented training events designed to increase readiness to defend the ROK, protect the region, and maintain stability on the Korean Peninsula. The exercise was conducted by ROK-U.S. Combined Forces Command and United States component commands in Korea, to include ground, air, naval and special operations.

U.S. 3rd Fleet leads naval forces in the Pacific and provides the realistic, relevant training necessary for an effective global Navy. Third Fleet constantly coordinates with U.S. 7th Fleet to plan and execute missions based on their complementary strengths to promote ongoing peace, security, and stability throughout the entire Pacific theater of operations.