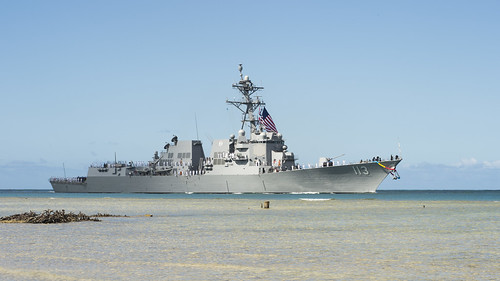 Adm. Harry Harris, Jr., commander of U.S. Pacific Command, will deliver the commissioning ceremony's principal address. Mrs. Laura Stavridis, the wife of retired Adm. James Stavridis, the former Supreme Allied Commander, Europe, will serve as sponsor of the ship. The ceremony will be highlighted by a time-honored Navy tradition when Mrs. Stavridis will give the first order to "man our ship and bring her to life!"

Cmdr. Michael Wagner, a native of Minnesota, is the commanding officer of the ship and leads the core crew of 350 officers and enlisted personnel. The 9,140-ton Finn was built by Huntington Ingalls Industries in Pascagoula, Mississippi. The ship is 509 feet in length, has a beam of 66 feet, and a navigational draft of 31 feet. The ship uses four LM2500 GE Marine Gas Turbines and two propellers to speeds up to 31 knots.

The ship's namesake, John Finn, is a Medal of Honor recipient who Adm. Chester Nimitz said displayed "magnificent courage in the face of almost certain death" during the attack on Pearl Harbor in 1941. Finn, a chief aviation ordnanceman, used a machine gun at the former Kaneohe Bay Naval Air Station to fire at Japanese aircraft for two hours during the attack. He remained on duty for 18 hours despite receiving as many as 21 wounds. Finn retired as a lieutenant in 1956 and lived to be 100 before passing in 2010. At the time of his death, he was the last living Medal of Honor recipient from the Pearl Harbor attack.

USS John Finn will be homeported at Naval Base San Diego, California.