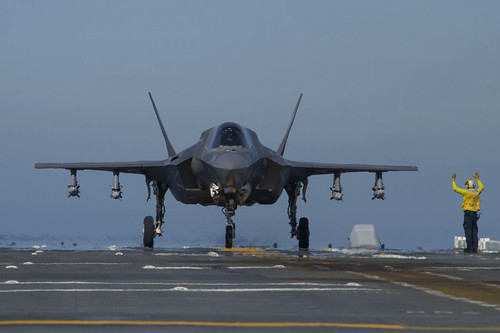 Attendees focused on planning and preparing the logistical support for the F-35B Lightning II first deployment scheduled to happen within the next year.

"The summit was primarily built to maximize communication, elevate problems, and arrive at solutions. This aircraft has a unique maintenance and support structure, and it is unlike any aviation weapon system presently in the Navy and Marine Corps inventories," said Rear Adm. John Palmer, U.S. Pacific Fleet's director of logistics, fleet supply and ordnance.

According to Palmer, deploying the F-35B will require focused efforts by all stakeholders to ensure logistics resources are available to support the Fleet introduction to include funding, spares, tools, support equipment, information systems support, and training.

"The aircraft and engine are large and require keen planning for hangar and flight deck spotting and storage. The best strategy for overcoming the Joint Strike Fighter roll-out challenge is to engage in continuous communications across all stakeholders," Palmer added.

"The Marine Corps has been successfully operating the F-35B Lightning II in the Western Pacific for almost seven months now with VMFA-121 at Marine Corps Air Station Iwakuni in Japan," said Brig. Gen. Brian C. Cavanaugh, deputy commander, U.S. Marine Corps Forces, Pacific. "Next year, we will make the first shipboard deployment for the squadron as part of a Marine Expeditionary Unit.

"The F-35B is a tremendous upgrade from the legacy AV-8B and these new capabilities will be demonstrated in future operations. This aircraft, unlike any others in the past, brings unique challenges due to the global logistic network associated with this platform," Cavanaugh added.

The aircraft is a short takeoff, vertical landing (STOVL) variant, and is the world's first supersonic STOVL stealth aircraft. It's designed to operate from austere bases and a range of air-capable ships near front-line combat zones. It can also take off and land conventionally from longer runways on major bases.

As the future of Marine Corps tactical aviation, the F-35B will replace the AV-8B Harrier and F/A-18 Hornet.