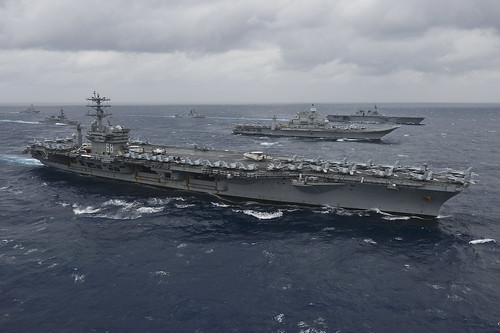 BAY OF BENGAL - Maritime forces from India, Japan, and the United States completed Exercise Malabar 2017, July 17, in the Bay of Bengal.

The exercise was designed to advance military-to-military coordination and capacity to plan and execute tactical operations in a multinational environment.

Exercise Malabar began in 1992 and this year marks the 21st rendition of the exercise. The objectives of Malabar 2017 were to improve interoperability between the U.S., Indian and Japanese maritime forces, provide an opportunity to conduct engagements with India and Japan, and demonstrate U.S. naval presence in the Indo-Asia-Pacific region.

"Exercise Malabar is a great symbol of friendship between India, the United States and Japan," said Indian Navy Rear Adm. Biswajit Dasgupta, flag officer commanding Eastern Fleet. "Malabar is one of the main elements in our defense partnership, and it conveys a message that the three countries are willing to work together closely in the maritime arena."

"Exercise Malabar ensures that we can operate with our partners in this region of the world as seamlessly as possible," said U.S. Navy Capt. Robert Westendorff, commander, Carrier Air Wing 11. "The main way it improves our capabilities is that we can all operate together."

Westendorff said that practicing operations as a cohesive unit will help with understanding common terms between the maritime forces in case they have to work together in the future.

"What it says to the world is that we operate as a coalition with friendly nations across the world in a partnership-building relationship so that if any contingency operation should arise in this region, the United States Navy can operate freely with our partners, working as one unit and one team," said Westendorff.

The U.S. Navy has patrolled the Indo-Asia Pacific routinely for more than 70 years promoting regional peace and security.