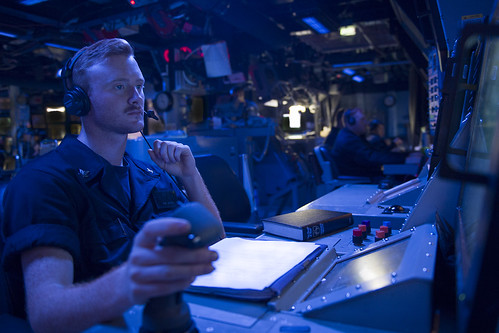 CORAL SEA - Watchstanders hover over chart tables, plotting courses as they assess possible tracks of an Australian submarine posing as an opposing force. Sailors at consoles “hook” tracks and report inbound aircraft, signaling to the tactical action officer that queries and other pre-planned responses need to be made.

But here at U.S.-Australian bilateral exercise Talisman Saber 17, Sterett is playing a different role than it normally would. It is taking commands and direction from an amphibious flagship, alongside Australian frigates with similar sensors and defense capabilities.

Sterett and partnered Australian frigates are contributing a robust set of offensive and defensive capabilities to ensure the amphibious ships can move into the littorals and land forces ashore.

“Sterett has conducted numerous bilateral exercises during the course of our deployment, and Talisman Saber is another great opportunity to work with our Australian partners and allies,” said Cmdr. Claudine Caluori, Sterett’s commanding officer. “Talisman Saber provides our Sailors several unique opportunities to showcase the skills we’ve honed over the course of deployment, and we look forward to contributing to the ESG’s defense.”

It’s 4 a.m. and Sailors aboard Sterett are manning up to launch one of its embarked helicopters, a MH-60R from Helicopter Maritime Strike Squadron (HSM) 49.

Within the construct of the exercise, Sterett and “Red Stinger,” are hunting a submarine and need to remain extra vigilant.

While amphibious ships have organic capability to defend against air, surface, and subsurface threats, the inherent capabilities of Sterett and its helicopter detachment expand the survivability of the amphibious force.

“The MH-60R has a number of capabilities that allow us search and potentially prosecute submarines, as well as contribute to a common maritime picture,” said Lt. Cmdr. Troy Leveron, from Ferdinand, Indiana, detachment Office-in-Charge for HSM 49. “Being able to employ our capabilities, within a joint and combined environment is important to all of us honing our skills”

Augmenting the airborne abilities is Sterett’s shipboard Sonar Technician (Surface) watch team, who are trained to notice subtle differences in the ocean’s bathometry and sound waves to detect submarines.

“We have a really great team,” said Lt. j.g. Kiefer Bohn, from Las Cruces, New Mexico and Sterett’s ASW officer. “We’re excited to do what we’re supposed to be doing – the sonar technicians are here [aboard Sterett] to track submarines, so giving them the opportunity to do that is pretty exciting.”

Talisman Saber is a biennial exercise which unites 33,000 U.S. and Australian personnel to build on partnerships, interoperability and the ability to respond to contingencies in the region.

Sterett, deployed under the U.S. 3rd Fleet Forward initiative, is on a regularly-scheduled deployment to the Western Pacific. Third Fleet operating forward offers additional options to the Pacific Fleet commander by leveraging the capabilities of 3rd and 7th Fleets. This operational concept allows both numbered fleets to complement one another and provide the foundation of stability in the Indo-Asia-Pacific region. 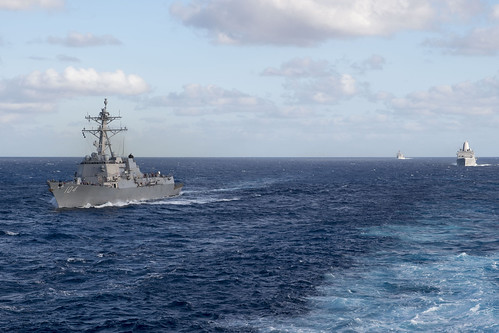