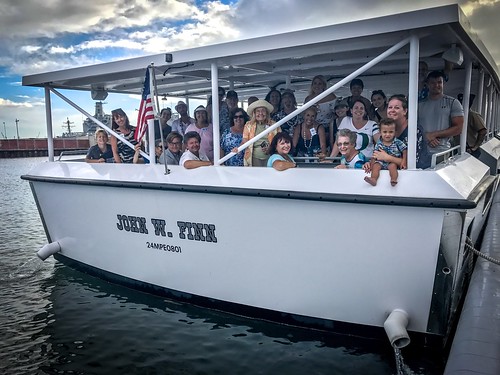 “It’s been amazing to visit this beautiful place where such a historic American event happened and to see how recognized and respected John still is,” said Dennis McCallister, Finn’s oldest living nephew. “His memory is everywhere at Kaneohe Bay; they still honor his bravery and courageousness to this day, so it was nice to witness that during our family’s time here.”

McCallister said Finn was always humble despite his stature as a hero during the Pearl Harbor attacks and made it a point to venture to the island each year on Dec. 7 to pay his respects to those who lost their lives there.

“John never missed a Dec. 7 commemoration at Pearl Harbor. He felt it was his responsibility to make the trip out every year,” said McCallister. “It was his dream to have his name on a U.S. Navy vessel, and I’m proud to say that dream is now a reality.”

The tour of Pearl Harbor allowed Finn’s family and friends to visit such sites as the USS Arizona Memorial, the Battleship Missouri Memorial and the site of the USS Utah.

“It’s a great honor for us to have you here with us in Pearl Harbor, during this historic week commemorating John Finn’s legacy,” said Jay Blount, Chief of Interpretation and Information for the World War II Valor in the Pacific National Monument, to the Finn family and their guests prior to the harbor tour. “John Finn was an American hero and an amazing human being, and as you’ve seen, that legacy is very much alive and well here in Pearl Harbor.”

Approximately 2,000 guests, including more than 50 friends and relatives of Finn’s family, attended the USS Finn commissioning ceremony on July 15.

“As we gather here at Pearl Harbor today, I can’t think of a more fitting place to commission this ship, to honor the legacy of John Finn and all Americans from the ‘Greatest Generation’, and to reflect on both the costs and the blessings of liberty,” remarked Adm. Harry Harris, Jr., commander, U.S. Pacific Command, during the commissioning ceremony.

Adm. Chester Nimitz said Finn displayed, “magnificent courage in the face of certain death” during the attack on Pearl Harbor and other Oahu military targets in 1941. Finn manned a .50-caliber machine gun while under heavy enemy machine gun fire. Although wounded, he continued to fight until ordered to vacate his post to seek medical attention. Following first aid treatment, he returned to action and led the charge to rearm aircraft returning from missions.

USS John Finn is the 63rd Arleigh Burke-class destroyer and was delivered to the Navy from shipbuilder Huntington Ingalls Industries on the 75th anniversary of the attacks on Pearl Harbor, Dec. 7, 2016. The ship is a multi-mission surface combatant capable of conducting anti-air warfare, anti-submarine warfare, and anti-surface warfare. As a multi-mission platform, it is capable of sustained combat operations supporting forward presence, maritime security, sea control and deterrence.