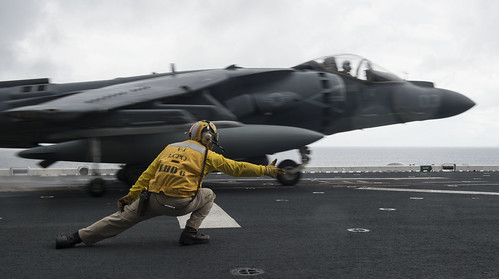 The AIT was designed to test the Marines of the 31st MEU and Sailors of the Bonhomme Richard Expeditionary Strike Group (BHR ESG) on their ability to conduct core missions, such as stability operations, non-combatant evacuations and disaster relief. Success during the exercise depends on the ability of Sailors and Marines to work together and rapidly transport personnel from ship to shore.

As the ship’s well deck combat cargo assistant, Armour oversees the storage and movement of 31st MEU vehicles and equipment, while also serving as a liaison between the embarked Marines and the Sailors of Bonhomme Richard and Naval Beach Unit (NBU) 7.

“For AIT, the Navy and Marine Corps really come together,” said Armour. “There are multiple training missions we’re doing during AIT. We have everything from vertical assaults to non-combatant evacuations. There are different things that the Marine Corps is trying to accomplish, and on the blue side we’re supporting the best we can from the ship.”

During the exercise, Sailors and Marines were able to develop and hone mission-oriented skills, which will be invaluable in the event of an actual crisis, said Armour.

“We were able to get training that gave us a realistic look at what we’re trying to do,” said Armour. “If it’s an air assault, if it’s hitting a beach somewhere, if it’s getting evacuees out or embassy reinforcement - whatever the mission is, whatever we get called for, we have the skill set to execute the mission.”

While the primary mission was to support the 31st MEU, Chief Mineman Philip Phillips, craft master of landing craft air cushion (LCAC) 21, NBU-7, said AIT also provided the Sailors with valuable experience in amphibious operations and allowed for each Sailor to master their own “craft.”

“I think my Sailors get a good sense of satisfaction when they come out here and interact with the Marines, as well as with the joint forces,” said Phillips. “Anytime we’re doing AIT or CERTEX [certification exercise], we’re constantly working with different Marines, and it’s actually good for us because where one group might be really efficient at one thing, the next group might be more efficient in a different area, so we’re able to pick up both those areas to make us better in what we do.”

The LCACs of NBU-7 provide Bonhomme Richard with a significant surface transportation capability. Phillips said that to be successful in this amphibious training, both Sailors and Marines have to be on the same page from the stages of planning and loading to launching and recovery.

“We know how much we can carry and the Marines know how much they can carry, so we have to find that in-between area to find out the most economical and efficient way possible to complete the missions,” said Phillips.

Phillips said AIT is also designed to prepare our Navy and Marine Corps team for the worst-case scenarios.

“If it comes down to an amphibious landing-type scenario, we’re not going into it blind. We’ve done it before. We’ve rehearsed it. We understand what’s all involved, and we understand what it takes to do it successfully,” said Phillips.

With the completion of AIT, the 31st MEU and BHR ESG move into a certification exercise (CERTEX) that will evaluate the 31st MEU on crisis response operations for a number of potential contingencies.

Bonhomme Richard, flagship of the BHR ESG, is operating in the Indo-Asia-Pacific region to enhance partnerships and be a ready-response force for any type of contingency.