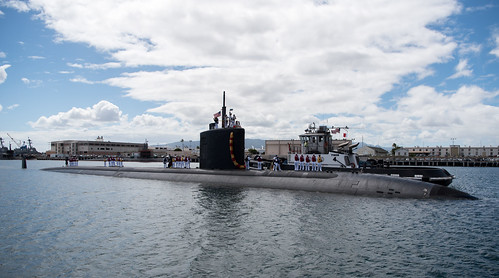 "It was amazing to watch this crew pull together through a challenging deployment workup and take on the challenge of sustaining the ramp-up through deployment,” said Cmdr. Jake Foret, a native of New Iberia, Louisiana and Santa Fe’s commanding officer. “I am proud of our crew’s commitment to keeping our boat and teams ready to execute all tasking.”

During the deployment, 29 enlisted Sailors and one officer earned their submarine warfare qualification.

“My most memorable achievement during deployment was earning my dolphins,” said Fire Control Technician 3rd Class Nicolas Tankersley, from Anna Maria Island, Florida. “Earning my dolphins was the pinnacle of all my hard work finally paying off. My dolphins enabled me to become part of an elite group known as ‘submariners.’”

“Santa Fe was thankful to expand the U.S. Navy’s partnership with the JMSDF,” said Lt. Cmdr. Rob Edmonson III, from Stockton, California, and Santa Fe’s executive officer. “We welcome any opportunity to work alongside our JMSDF submarine force allies.”

Upon returning to Pearl Harbor, Master Chief Electronics Technician (Navigation) Jorge Perez, from St. Augustine, Florida and Santa Fe’s Chief of the Boat, praised his crew for their hard work and preparation for the six-month deployment.

“Preparing for any deployment is challenging, and this was no exception” said Perez. “The experience gained by this next generation of submariners will prove invaluable as a foundation for our future operations. I could not be prouder of each Sailor and I look forward to continue to serve with them.”

Commissioned on Jan. 8, 1994, Santa Fe is the 52nd ship of the Los Angeles-class and is homeported in Pearl Harbor, Hawaii.