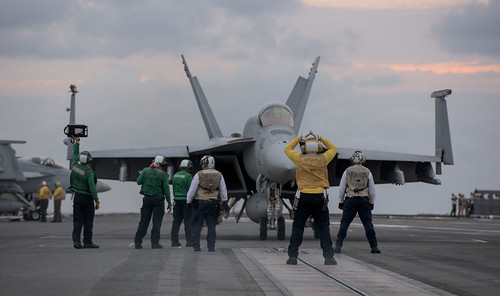 In this file photo, Sailors aboard USS Ronald Reagan (CVN 76) prepare to launch an F/A-18E Super Hornet from VFA-195, in May. (U.S. Navy/MC2 Nathan Burke)

Strike Fighter Squadrons (VFA) 115 and 195, along with Electronic Attack Squadron (VAQ) 141 will relocate to MCASI at the conclusion of the USS Ronald Reagan Carrier Strike Group's fall patrol.

VFA-115, VFA-195 and VAQ 141 will join Carrier Airborne Early Warning Squadron (VAW) 125, which forward deployed to Iwakuni earlier this year. The relocation of all CVW-5 fixed-wing aircraft from Naval Air Facility Atsugi (NAFA) to MCASI is part of the Defense Policy Review Initiative (DPRI), as directed in the May 1, 2006 Security Consultative Committee Document, also known as the U.S. - Japan Roadmap for Realignment. NAFA will remain the home for all CVW-5 rotary-wing aircraft.

The timing of the squadron moves is contingent upon the completion of necessary squadron facilities at MCASI, some of which are still under construction. The phased relocation of the remaining CVW-5 fixed-wing squadrons will occur on a timeline agreed upon by the U.S. and Japanese governments.

Though CVW-5 fixed-wing squadrons will be based in Iwakuni, NAFA will remain a vital base for the U.S.-Japan alliance and CVW-5 aircraft will occasionally use the installation as a divert field, or for training, refueling or maintenance.

Both VFA-115 and VFA-195 fly the F/A-18E Super Hornet, while VAQ-141 flies the EA-18G Growler, an airframe based on the F/A-18F Super Hornet equipped for electronic countermeasure missions.

CVW-5, the nation's "911" air wing, is the U.S. Navy's most advanced carrier air wing and is a critical combat strike element of Battle Force 7th Fleet, the only forward-deployed carrier strike group in the U.S. Navy. Deploying aboard USS Ronald Reagan (CVN 76), the air wing contributes to peace and security in the Indo-Asia-Pacific region.