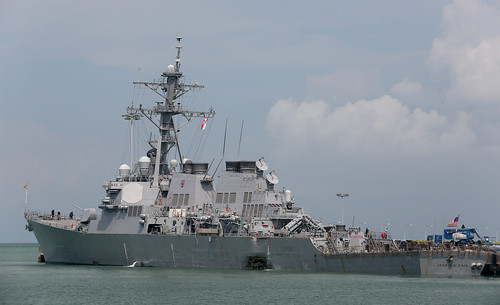 Ships and aircraft from the Royal Malaysian Navy and Republic of Singapore Navy joined search efforts yesterday and continue to provide assistance.

Search efforts are focused on an area east of the Strait of Malacca and Singapore where McCain was involved in a collision with the merchant vessel Alnic MC early in the morning on Aug. 21 (as reported 6:24 a.m. Japan Standard Time) while transiting to Singapore for a routine port visit.

During the collision, John S. McCain sustained significant hull damage that resulted in flooding to nearby compartments, including crew berthing, machinery, and communications rooms. Damage control efforts by the crew halted further flooding at sea.

John S. McCain and America arrived at Changi Naval Base yesterday afternoon. While both ships are in Singapore, America is providing messing and berthing services to John S. McCain crew members and supporting damage control efforts on board which are focused on dewatering the ship and restoring auxiliary systems. Ship Repair Facility divers have commenced assessments of the hull as well.