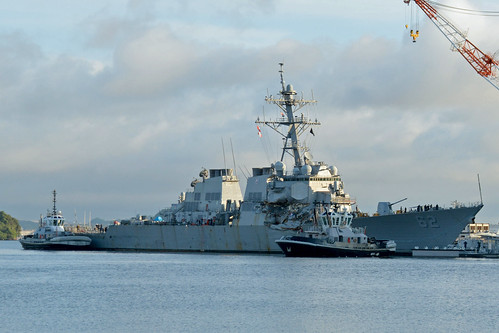 WASHINGTON - The Navy intends to award a contract initiating the restoration of USS Fitzgerald (DDG 62) at Huntington Ingalls Industries (HII) in Pascagoula, Mississippi, before the end of the fiscal year.

The start date, scope, cost and the time required to fully restore the ship have not yet been determined.

The Navy chose this course of action following a review of the capabilities and workload of new construction and repair shipyards. Given the complexity of the work and the significant unknowns of the restoration, the Navy determined that only an Arleigh Burke-class shipbuilder could perform the effort.

Only HII has the available capacity to restore USS Fitzgerald to full operational status in the shortest period of time with minimal disruption to ongoing repair and new construction work.

Additionally, the Navy is currently evaluating proposals to award a contract for the heavy lift transport of USS Fitzgerald from SRF-JRMC Yokosuka to the continental United States.

USS Fitzgerald was involved in a collision with the Philippine-flagged merchant vessel ACX Crystal on June 17. The ship suffered damage on her starboard side above and below the waterline. Compartments that were affected include two berthing spaces, a radio room, a machinery space, and various lockers, passageways, and access trunks.

In addition to the restoration effort, the Navy intends to incorporate previously planned modernization efforts into the availability that were to have taken place at SRF-JRMC Yokosuka in 2019.

Previous story
U.S. and Canadian ships to participate in Los Angeles Fleet Week
Next story
Swift to Fleet: Pause to focus on basics of operations