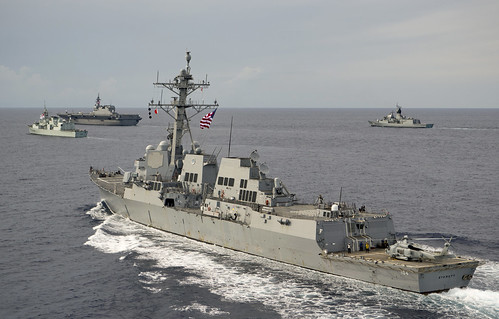 "I am extremely proud of the way Sterett Sailors took every challenge, every schedule change, every last-minute tasking, and met it with skill and professionalism," said Cmdr. Claudine Caluori, Sterett's commanding officer. "We've done well in our mission, and we're very excited to be coming home to our families and friends in San Diego."

As established during the three-ship Pacific Surface Action Group deployment in 2016, Sterett-Dewey SAG remained under U.S. 3rd Fleet control, including beyond the international dateline which previously divided operational areas of responsibility for 3rd and 7th Fleets. Third Fleet operating forward offers additional options to the Pacific Fleet commander by leveraging the capabilities of both fleets. This operational concept allows both numbered fleets to complement one another and provide the foundation of stability in the Indo-Asia-Pacific region.

Sterett is homeported in San Diego and is part of the U.S. Naval Surface Forces and U.S. 3rd Fleet. Third Fleet leads naval forces in the Pacific and provides the realistic, relevant training necessary for an effective global Navy. Third Fleet constantly coordinates with U.S. 7th Fleet to plan and execute missions based on their complementary strengths to promote ongoing peace, security, and stability throughout the Pacific theater of operations.