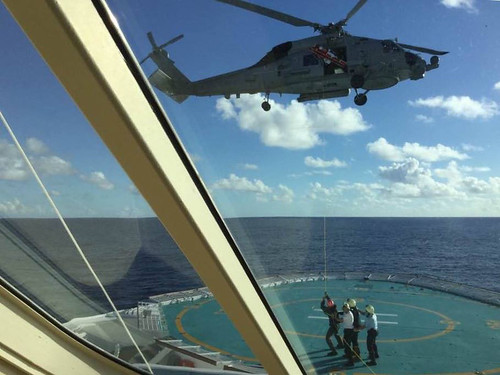 A U.S. Navy MH-60R Sea Hawk helicopter aircrew from Helicopter Maritime Strike Squadron (HSM) 37 based at Kaneohe Bay, Hawaii, arrived on scene at 3:55, safely hoisted the man aboard and delivered him to awaiting emergency medical services at Kahului Medical Center in Maui.

“This case illustrates the importance of our partnership with the Navy”, said Lt. Duane Zitta, command duty officer, Coast Guard Joint Response Coordination Center Honolulu. “In the remote Pacific, long-range capable search and rescue assets are vital to getting people to a higher level of medical care as quickly and safely as possible.”

JRCC personnel in Honolulu received notification at 5:18 p.m. Tuesday from the master of the cruise ship Radiance of the Seas, of a passenger aboard suffering from symptoms of abdominal distress.