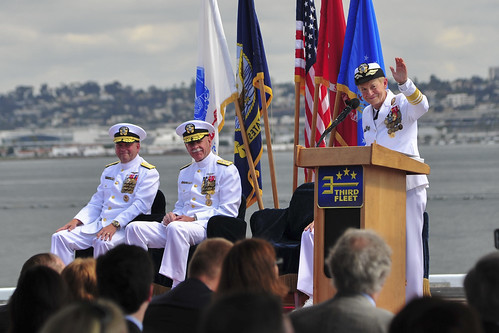 During the ceremony, Tyson retired from active duty after 38 years of honorable naval service.

Commander of U.S. Pacific Fleet Adm. Scott H. Swift, who served as the ceremony’s guest speaker, said that when Tyson was commissioned the opportunities available for women was much different.

“Women were not allowed to serve in combatant ships, and they’d only just been given the opportunity to serve on sea duty aboard support and auxiliary ships less than a year prior. But for those of us that know her well, Nora was never one to let apparent obstacles get in the way of success,” said Swift.

“She would tell you that she was simply the beneficiary of fortunate timing, but any who have had the privilege to work with and for Nora know that she has earned her position through her tireless work ethic, her outstanding leadership, her unwavering pride in service, and her love for Sailors. Without a doubt, she was the best person for the job,” Swift said.

Under Tyson’s command, 3rd Fleet’s role expanded in the Pacific under the U.S. Pacific Fleet initiative Third Fleet Forward. Third Fleet Forward is an operational concept where 3rd Fleet maintains command and control of units throughout their deployment rather than transferring operational control to U.S. 7th Fleet once units cross the international date line. This provides the Pacific Fleet commander with additional flexibility and options by applying the full range of capabilities of both numbered fleets based on specific missions rather than geographic areas.

During the ceremony, Swift also presented Tyson with her second Distinguished Service Medal in recognition of her exceptional meritorious service to the United States Navy.

In her remarks, Tyson acknowledged the barriers she’s broken and said that while she is proud to have been the first woman to command a carrier strike group and the first woman to command an operational numbered fleet, she is even more proud to be part of a Navy where those milestones are in the past. She also thanked her friends, family, and those who have supported her throughout her career.

“As leaders, we know we do not succeed on our own. We are here because of the people who put their faith in us – the officers who pushed us beyond our comfort zones, the chiefs who molded us into naval officers, and perhaps most importantly, we are here because of all those incredible men and women we’ve been privileged to lead and mentor along the way – the Sailors and officers who placed their trust in us to make the right decisions,” said Tyson.

Tyson said she was incredibly proud of the men and women serving in 3rd Fleet and was confident in turning over command to Alexander.

“I’m also proud to be handing this command over to a leader who I know will take 3rd Fleet to new heights. Sarge [Alexander], you are absolutely the right person for the job... I don’t think, in fact I know, there’s not a better job in the Navy, and I know you are ready for the challenges we’re sure to face,” said Tyson.

Swift said one of those challenges is the evolution of 3rd Fleet that will continue to evolve under Alexander’s leadership.

“It is really about the continuation of a cultural change here at 3rd Fleet, begun by Nora but carried through by Sarge. Cultural change is commander’s work, and it takes time. But our culture, what has made us so successful in history will continue to make us successful in the future, is the culture of a Navy and a Fleet that demands excellence in operation, always based on the highest standards of readiness,” said Swift. “I couldn’t think of a better individual to be flown behind Nora and taking over the helm of really a fleet of heritage in 3rd Fleet.”

Alexander, whose most recent assignment was as director of Maritime Operations at U.S. Fleet Forces Command, said he was honored to take command and looks forward to carrying on the legacy of past 3rd Fleet commanders.

“Adm. Swift’s vision of 3rd Fleet Forward as a second maneuver element in the Pacific is more relevant today than ever...we must remember our roots. We are the ancestors of Bull Halsey and Duke Hernandez who were charged with transforming 3rd Fleet at a critical time in our history. It is our time to carry this operational vision forward. I pledge you my absolute best effort in continuing the transformation initiated by Nora. It is my promise to each and every one of you,” said Alexander.

He also served tours as an A-6E bombardier/navigator with Attack Squadron (VA) 165, VA-155, and VA-196; staff of Cruiser Destroyer Group 3; executive officer of USS Dwight D. Eisenhower (CVN 69); assistant to the director of the Joint Staff; aviation commander detailer (PER-431); and as an A-6E instructor with VA-128.

U.S. 3rd Fleet was formed during World War II on March 15, 1943, under the command of Fleet Adm. William F. "Bull" Halsey. Third Fleet leads naval forces in the Pacific and provides the realistic, relevant training necessary for an effective global Navy. Third Fleet constantly coordinates with U.S. 7th Fleet to plan and execute missions based on their complementary strengths to promote ongoing peace, security, and stability throughout the Pacific theater of operations. 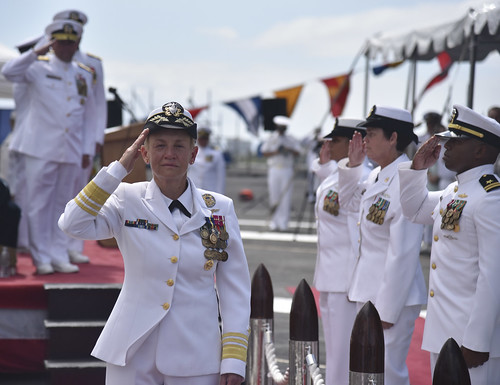