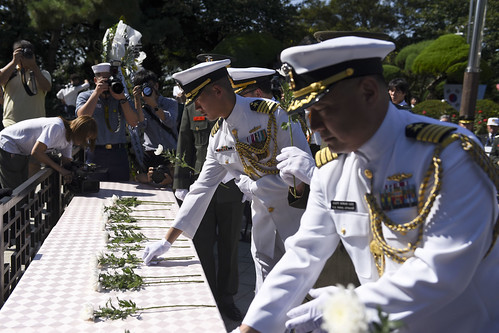 The 67th commemoration ceremony began at the Gen. MacArthur Statue in Freedom Park in Incheon, September 15, where Capt. Hank Kim, chief of staff for CNFK, Adm. Um, Hyun-Sung, chief of naval operations, Republic of Korea Navy, Incheon city officials, Korean War veterans and other military members placed flowers at the base of the statue in honor of the historical event.

“The Incheon Landing was a major success by combined U.S. and ROK forces that really turned the tide during the Korean War,” said Kim. “Representing the U.S. and CNFK by not only witnessing, but also participating in this annual ceremony to honor the bravery and courage of those men was both an incredible and humbling experience.”

Republic of Korea (ROK) nationals including former sailors and marines as well as families visited the CNFK information and photo display booth to learn about the history and current mission of the U.S. Navy in Korea.

“It is crucial we honor this event every year,” said Lee, Sang-Kyu, a former ROK wwwmarine. “Incheon landing is a very important moment in Korea’s history and it’s vital we pass down that knowledge to the younger generations, so they understand the sacrifice and significance of what happened here so long ago.”

The U.S. and ROK alliance has grown and developed into an enduring partnership that routinely works together throughout the region on land and in the maritime environment. These operations include regular scheduled exercises and continuous community outreach events, which make up the array of photos on display. Throughout each day, Koreans of all ages stopped in to view the photos, talk with the Sailors and share their own experiences.

"It was a true honor being able to attend an event of such historic significance to this country and the U.S. alliance with the ROK,” said Cryptologic Technician Interpretive 3rd Class Alixandria Yang, assigned to Navy Information Operations Detachment, Seoul. “I loved having the chance to use my Korean language skills to interact with the locals discussing our shared history and introduce them to a few aspects of American culture as well.”