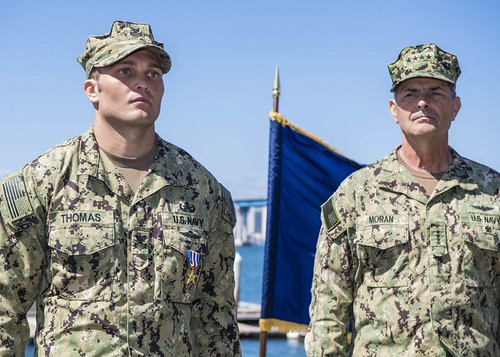 The Vice Chief of Naval Operations, Adm. Bill Moran, recognized Thomas for his conspicuous gallantry and intrepidity in action against the enemy, in support of Operation Inherent Resolve.

"Today we recognize the heroic actions of individuals and the legacy of their teammates. This recognition is well deserved, and it's an acknowledgment of bravery, training, and dedication to team and country," said Moran.

On Oct. 20 and 21, 2016, while conducting combined clearance operations, Thomas' element became engaged in a 10-hour firefight with forces of the Islamic State of Iraq and Syria. Throughout the battle, he continuously maneuvered through heavy small arms, rocket-propelled grenades and mortar fire in order to engage the enemy and clear paths for his teammates.

After the lead vehicle in the convoy struck an improvised explosive device, mortally wounding a teammate, Thomas exited his vehicle and swept the vicinity for additional explosive devices in spite of enemy mortar and small arms fire impacting near him.

This enabled medics to maneuver to the damaged vehicle and provide critical combat care to the casualty. Thomas then guided the remaining vehicles out of the minefield, ensuring all forces safely reached the medial evacuation zone.

"No one that was present on the 20th of October knew better than Jeff the dangers he was facing," said Cmdr. Geoff Townsend, commanding officer of EODMU 3. "After the EOD supervisor, a friend and mentor, was mortally wounded Jeff knowingly exposed himself to hazards in order to protect the lives of his teammates and brothers in arms, and secure a MEDEVAC for his wounded teammate. His actions that day saved the lives of his teammates and exceeded all measures of selflessness and devotion to his country."

The ceremony also included the presentation of the Bronze Star Medal with Combat "V" to Lt. Morgan Dahl and the Navy and Marine Corps Achievement Medal (with Combat Distinguishing Device) to Explosive Ordnance Disposal Senior Chief Jon Hamm. Dahl was awarded the Bronze Star for his heroic achievement during combat operations as vehicle commander and primary explosives ordnance disposal technician, when he safely guided the tactical advance of his combined convoy under constant direct and indirect enemy. Hamm was awarded the Navy and Marine Corps Achievement Medal for his heroic achievement when Islamic State fighters engaged Hamm's element with effective automatic weapons and rocket propelled grenade fire, he maneuvered without hesitation under fire in order to clear a safe route allowing his team to suppress the enemy.