VFA-115 closes out 31 years of operations at NAF Atsugi 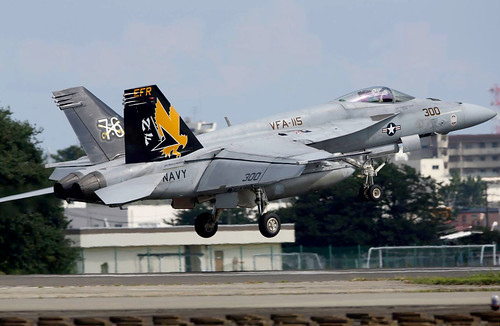 The squadron's F/A-18E Super Hornets launched from Atsugi to begin a regularly scheduled patrol aboard USS Ronald Reagan (CVN 76) in support of security and stability in the Indo-Asia-Pacific region. At the conclusion of the patrol, the Eagles will disembark Reagan for their new home of Marine Corps Air Station Iwakuni, Japan.

The squadron initially arrived at Atsugi in 1973 when Carrier Air Wing (CVW) 5 and the USS Midway (CV 41) were selected to form the nucleus of the U.S. Navy's first permanently forward deployed aircraft carrier battle group. The Eagles flew the A-6 Intruder from Atsugi for more than two decades, becoming a fixture in the region by completing numerous patrols in the Western Pacific and Indian Oceans aboard Midway and USS Independence (CV 62). During this period, the squadron also deployed to the Arabian Gulf to participate in Operations Desert Shield, Desert Storm, and Southern Watch.

In 1996, the Eagles bid their first farewell to Atsugi when they moved to Naval Air Station Lemoore in order to transition to the F/A-18C Hornet.

The squadron's hiatus from Japan lasted until 2009 when the Eagles returned to Atsugi with their current aircraft, the F/A-18E Super Hornet. Following their return, the squadron completed multiple regional security patrols onboard USS George Washington (CVN 73) and Ronald Reagan as a component of the U.S. Navy's most technologically advanced carrier air wing.

With a total of 31 years of history in Atsugi, the relocation to Iwakuni is part of a broader relocation of CVW-5 fixed-wing aircraft, a move that was stipulated under a 2006 agreement between the U.S. and Japan. VFA-115 will be one of the first CVW-5 jet squadrons to relocate.

While the squadron will now call Iwakuni home, there will still be periodic training and operational requirements that will take squadron members and aircraft back to Atsugi for short periods.

VFA-115 is forward-deployed to the 7th Fleet area of operations as part of CVW-5 and in support of security and stability in the Indo-Asia-Pacific.