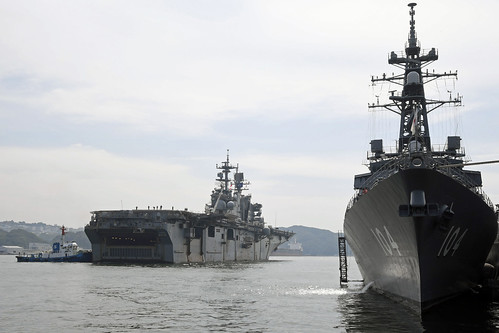 Additionally, Bonhomme Richard conducted port visits to Australia's cities of Sydney, Brisbane and Melbourne, during which many Sailors and Marines participated in community service projects, including visits to children's hospitals and care centers for underprivileged and disabled members of the local communities. Alongside the multiple COMREL events, the crew also hosted several ship tours to allow Australian allies a look into life aboard a U.S. naval amphibious vessel.

"Our blue-green team worked extremely hard day-in and day-out during this deployment, executing a multitude of exercises and certifications while fulfilling their regular shipboard duties," said Capt. Larry McCullen, commanding officer of Bonhomme Richard. "Each Sailor and Marine helped strengthen a longstanding relationship with our allies through their hard work and positive community interactions. I am very proud of the dedication and perseverance they have shown throughout these four months, and it gives me great pleasure to bring them home safely - that is my number one priority."

Prior to returning to Sasebo, Bonhomme Richard completed the final 31st MEU offload in White Beach, Okinawa, marking the unit's farewell deployment aboard the ship, as Bonhomme Richard is scheduled to turn over duties in 7th Fleet with the amphibious assault ship USS Wasp (LHD 1) in winter 2017.

"As this will be the last time we are in Sasebo for a significant period of time, let's do liberty right so you can enjoy your time, travel around Japan, and get ready for our homeport shift to San Diego," said McCullen during a shipboard Captain's Call with the crew.

As part of the all-hands, McCullen recognized several Sailors for their achievements throughout the deployment and for their commitment to the crew and mission.

"I was not expecting to be recognized," said Aviation Boatswain's Mate (Handling) 1st Class Lakrisha Robinson, one of the nine Sailors who received a commanding officer's letter of appreciation. "I guess it just shows that when you do your job with pride, people are going to pick up on it and appreciate what you do."

While the crew was all together one last time before the end of the deployment, McCullen also disseminated information that would help the Sailors prepare for the transition from 7th Fleet's forward-deployed naval forces (FDNF) to 3rd Fleet's naval forces.

"I know that it's tough being an FDNF Sailor, but the best things in life are those hard things that you go through and then when you look back on them, you're going to be very proud of your service in this Navy," said McCullen.

The Bonhomme Richard Amphibious Ready Group (BHR ARG) consists of Bonhomme Richard, USS Green Bay (LPD 20) and USS Ashland (LSD 48). Bonhomme Richard, flagship of the BHR ARG, is forward-deployed to the Indo-Asia-Pacific region to enhance partnerships and be a ready-response force for any type of contingency.

Correction: A previous version of this story incorrectly stated that Bonhomme Richard is scheduled to turn over duties to USS Wasp in winter 2018. The Overseas Force Structure Change of Wasp relieving Bonhomme Richard was originally planned for winter 2017. However, after supporting hurricane relief and recovery efforts in the Caribbean, Wasp's transit to Japan was delayed and began in late November 2017.