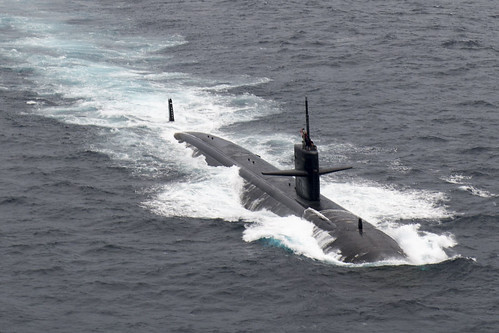 The SUBCOMP exercise provided an excellent opportunity to further the integration and trilateral coordination in an anti-submarine warfare (ASW) environment for the three navies.

The competition stressed each crew’s ability to conduct various aspects of ASW. The top performer is recognized with the Japanese Battle Efficiency Award.

“The Key West crew found this exercise to be an excellent opportunity to plan, train and execute ASW tactics while in a deployed environment,” said Cmdr. Grady Hill, Key West’s commanding officer. “The crew performed superbly, rising to the challenge and honing critical skills with our partners.”

The RAN was excited about their initial participation in the competition.

“We’re honored to participate in this year’s JMSDF Submarine Competition,” said Cmdr. Dan Sutherland, Dechaineux’s commanding officer. “This is our first opportunity to participate and I’m looking forward to future exercises with the JMSDF and the U.S. Navy.

The JMSDF was also excited to have Dechaineux and Key West participate in the competition. “We were very pleased to have Dechaineux and Key West to participate in this year’s Submarine Competition,” said Cmdr. Ryu Moriyasu, JMSDF Liaison Officer. “Their involvement greatly increased our interoperability and built on a strong partnership among our forces.”

During the exercise, a JMSDF officer embarked Key West.

“Our officer, who embarked the Key West, expressed gratitude and said he learned a great deal from the experience,” said Moriyasu. “It gave him a much better understanding of U.S. submarine operations and will help us work together in the future.”

Key West is a member of Commander, Submarine Squadron (COMSUBRON) 15, which is located at Polaris Point in Apra Harbor, Guam. COMSUBRON 15 staff is responsible for providing training, material and personnel readiness support of four Los Angeles-class attack submarines stationed in Guam. The submarines and submarine tenders USS Frank Cable (AS40) and USS Emory S. Land (AS39) are part of the U.S. Navy's forward-deployed naval force are capable of meeting global operational requirements.