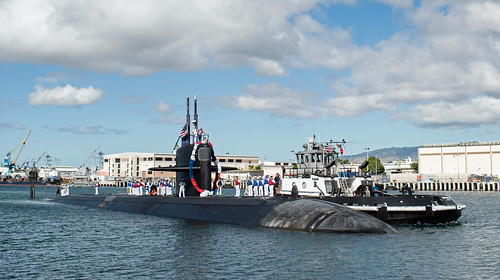 "The crew and I were sad to leave Guam, but at the same time we're excited to see our new home and start the next chapter for Chicago," said Cmdr. Brian Turney, commanding officer of the submarine. "We are very happy to finally be in Hawaii and reunited with our families."

Shifting a boat from one port to another can be a complicated task involving, families, Sailors and many civilian and military organizations working together, and Chicago was no different.

"It took a lot of planning and communication across many organizations to accomplish this change of homeport," said Turney.

Turney thanked the Chicago's Ombudsman Kalyn Kasten for her hard work ensuring families were taken care of during the transition.

"I just wanted to make sure all the families were squared away," said Kasten. "That meant ensuring things like their pay was up to date, and they were met at the airport by someone."

Kasten also said that while she loved Guam, she was excited to be in Hawaii and try new activities.

Chicago is scheduled for a maintenance period at Pearl Harbor Naval Shipyard. Once complete, the boat will return to the fleet ready to support the nation as one of the most advanced submarines in the world.

Turney noted how effective the Chicago has been in recent operations while maintaining a robust schedule.

"Since 2012, Chicago served as the tip of the spear in Guam," said Turney. "She steamed hundreds of thousands of nautical miles in support of national and Pacific Fleet objectives, and participated in numerous national and international exercises."

Now that the boat has arrived in Pearl Harbor and the focus of the crew will shift to work in port and capitalizing on local training opportunities.

The submarine is now assigned to Submarine Squadron 7 headquartered at Joint Base Pearl Harbor-Hickam.