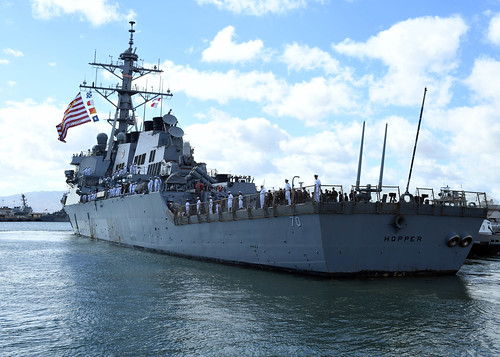 Hopper has a crew of nearly 330 officers and enlisted Sailors and is a multi-mission ship designed to operate independently or with an associated strike group.

While deployed, the ship will conduct theater security cooperation and maritime presence operations with partner nations.

Having steadily worked through a sustainment cycle, the ship's commanding officer is confident in his ship's performance.

"The crew has worked hard sustaining all of the ship's certifications since returning from deployment seven months ago," said Cmdr. Jeff Tamulevich, commanding officer of Hopper. "I am proud of the resiliency of these Sailors and all they have accomplished to maintain Hopper's readiness. We look forward to operating with our allies and partners from around the world again."

Hopper is named after Rear Adm. "Amazing" Grace Hopper who is best known for her accomplishments as a pioneering computer scientist. The ship was last deployed to the Arabian Gulf, Western Pacific, and Indian Ocean from August 2016 to February 2017.

Hopper is part of U.S. 3rd Fleet and U.S. Naval Surface Forces. U.S. 3rd Fleet leads naval forces in the Pacific and provides realistic, relevant training necessary for an effective global Navy, working constantly with U.S. 7th Fleet. The forces of both fleets complement one another across the spectrum of military operations in the Pacific.