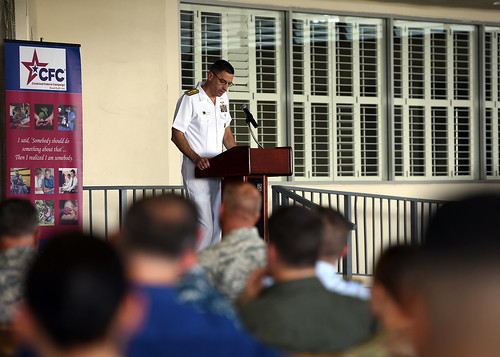 COMPACFLT is this year’s Hawaii Pacific Region Campaign chair, an honor that rotates between the military services in Hawaii each year.

“This year's CFC theme is ‘Catch the Giving Wave,’ which encourages us to build upon the tradition of bringing together federal civilian, military, and U.S. postal service employees to accomplish more than we ever could when acting alone,” said guest speaker, Rear Adm. Matthew Carter, Pacific Fleet deputy commander. “Last year, federal employees across the nation and stationed around the world chose to give by contributing more than $167 million to the causes they cared about. Of that amount, more than 16,000 federal employees in the Hawaii pacific region pledged nearly $4 million to help people and communities in need.”

The Hawaii-Pacific area campaign encompasses the Hawaiian Islands, territories and commonwealths in the Central and Western Pacific including Guam, the Commonwealth of the Northern Mariana Islands and American Samoa representing a donor base of approximately 93,000 federal civilian and active and reserve military personnel.

According to the U.S. Office of Personnel Management official website, the CFC’s mission is to promote and support philanthropy through a program that is employee-focused, cost-efficient, and effective in providing all federal employees the opportunity to improve the quality of life for all.

“For those of us that call this area home, the CFC is a great way to get involved with the programs that can have an immediate and lasting impact on our community,” said Carter. “Together we fund research that can one day cure diseases, we feed the hungry, we care for our veterans and wounded soldiers, we reunite loved ones, we give shelter to the homeless, we nurture animals and the environment, we promote civil rights, literacy, the arts, scouting, and any number of other causes. The list goes on and on.”

Cmdr. Regina Cox is this year’s Hawaii-Pacific campaign manager and has been a part of the CFC throughout her 33 year military career.

“It’s an honor to be appointed this year’s Hawaii-Pacific Campaign Manager,” said Cox. “I have a lot of admiration for what these charities do and because of that I want to do a good job. It’s a lot of work but when you meet people that these organizations helped you can see what these charities can really do for people.”

Several local charity organizations manned booths at the ceremony and spoke with service members and federal employees about their programs.

“To be here today is inspiring,” said Cyndi Sheehan, Legacy Gifts Officer for Make-A-Wish Hawaii. “A lot of our kids have military inspired wishes, so to have the military support us support the military and allow us to grant these wishes truly goes full circle,” she added.

New regulations have been put into effect during this year’s campaign based on results from the 50th anniversary commission. Some of the key changes are:

The Combined Federal Campaign is over 50 years old, and today is known to be the most inclusive workplace-giving campaign in the world, with the number of participating charities estimated at more than 20,000 nonprofit charitable organizations worldwide. The charities supported through the CFC range from local community groups to large, well-known charities.