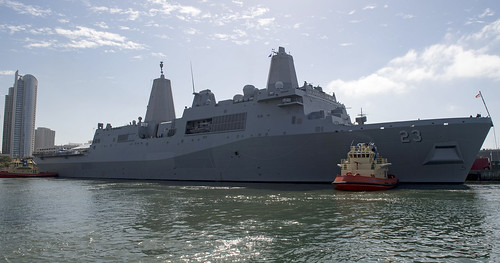 Rushmore, Mobile Bay, Spruance and Champion will participate in a Sea and Air Parade demonstration, along with Navy air squadrons, Oct. 14. Anchorage (LPD 23) and Midgett will be available for general visiting at Broadway Pier, Oct. 13-15.

Fleet Week San Diego is a celebration of the sea services and offers the public the opportunity to tour ships and interact with Service members to gain a better understanding of how maritime forces support national defense and freedom of the seas. It also provides Sailors, Marines and Coast Guardsmen the opportunity to share their experiences while serving our country. Annual disaster preparedness training between the Navy, Marine Corps, Coast Guard and local first responders occurs as well.

U.S. 3rd Fleet leads naval forces in the Pacific and provides the realistic, relevant training necessary for an effective global Navy. Third Fleet works constantly with U.S. 7th Fleet. The forces of both fleets complement one another across the spectrum of military operations in the Pacific.