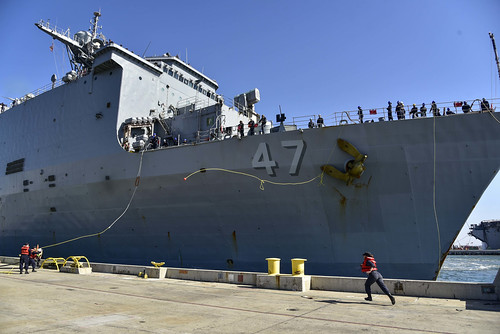 The U.S. Coast Guard is responsible for patrolling the waters around numerous islands associated with the United States throughout the region. Each of these islands has territorial waters stretching out to 12 miles from shore.

Beyond that, stretching out to 200 nautical miles is an Exclusive Economic Zone, an area defined by international law that allows each nation exclusive rights to the exploration and use of marine resources. Oceania contains 43 percent, or approximately 1.3 million square miles, of United States' EEZs.

OMSI is a secretary of defense program aimed to diminish transnational illegal activity on the high seas in the Pacific Island Nations of Oceania’s Exclusive Economic Zones (EEZ) and to enhance regional security and inoperability with partner nations.

"I am extremely proud of the ship and its crew,” said Cmdr. John Ryan, Rushmore commanding officer. "This is Rushmore’s first OMSI mission and the crew worked very hard to prepare and when called upon to perform, they executed every mission tasked to them flawlessly. Their loved ones should be proud of the work they have done over these past two months and the Rushmore team is excited to return home to our families and friends."

This deployment was a learning experience for many of Rushmore’s junior Sailors, some of whom have never been on deployment. The officers and crew achieved numerous new career milestones to include the following: six reenlistments, 47 enlisted surface warfare specialist (ESWS) qualifications, four engineering officers of the watch (EOOW), two officers of the deck (OOD), six combat information center watch officers (CICWO), and four anti-terrorism tactical watch officers (ATTWO).

While anchored in Vanuatu. Rushmore also executed diplomatic tasking by hosting several foreign VIPs, dignitaries, and a hosted a visit by U.S. Ambassador to Papua New Guinea, Solomon Islands, and Vanuatu Catherine Ebert-Gray. During the visit, the crew provided tours of the ship, allowing visitors the opportunity to see and experience life aboard a U.S. Navy warship.

Rushmore is homeported in San Diego and is part of U.S. Naval Surface Forces and U.S. 3rd Fleet. U.S. 3rd Fleet leads naval forces in the Pacific and provides the realistic, relevant training necessary for an effective global Navy. Third Fleet constantly coordinates with U.S. 7th Fleet to plan and execute missions based on their complementary strengths to promote ongoing peace, security, and stability throughout the entire Pacific theater of operations.