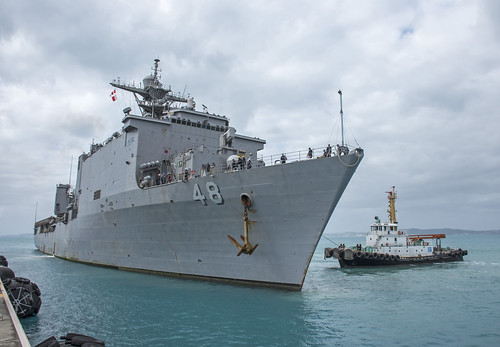 Blue Chromite is a joint field training exercise held annually between the U.S. Navy and U.S. Marine Corps to strengthen interoperability and increase proficiencies through amphibious and aerial operations.

"The purpose is to further our relationship with the Navy," said Maj. Benjamin Cather IV, acting executive officer for 1st Battalion, 3rd Marines. "The exercise will improve and ensure our amphibious and aerial capabilities. Force from sea, air and land, altogether."

Cather said Blue Chromite will test a wide range of skill sets, to include reconnaissance missions and tactical insertions. The exercise is designed to evaluate forward deployed battalions and squadrons while maximizing the number of III Marine Expeditionary Force (MEF) units conducting operations while fully integrated with naval forces.

"It's good to have the Marine Corps and Navy working together," said Cather. "It's what we're meant to do."

Blue Chromite will be the second time Ashland has partnered with Marines this deployment, since completing Talisman Saber in July.

"It's a perishable skill if we don't continue to train with the Marines," said Cmdr. Steven Wasson, Ashland's commanding officer. "This is one more great opportunity to keep up our proficiency and work together."

Part of U.S. 7th Fleet's forward deployed naval forces out of Sasebo, Japan, Ashland has been on a routine deployment for the past five months as a ready-response asset for any of contingency.