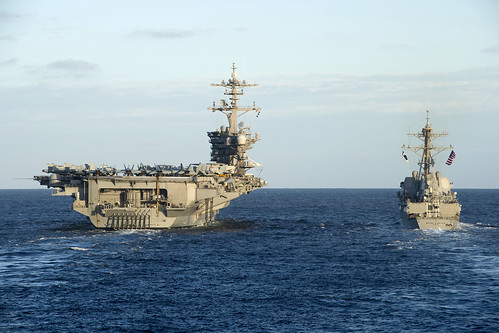 Completing the exercise indicates the strike group's readiness for executing missions across all warfare areas. The group successfully conducted a series of at-sea drills, missile shoots, and strike operations using a variety naval platforms and weapons.

"Our time at sea was well spent. We trained how we fight," said Commander, Carrier Strike Group 1 Rear Adm. John Fuller, who leads the group. "We worked hard as a team to refine our battle rhythm and execute complex, integrated operations. We're ready for deployment."

As one of the Navy's premier forces for deterring aggression and protecting U.S. interests around the world, the strike group is ready to promote regional maritime partnerships, project power, provide maritime security and maintain freedom of navigation when tasked.

The air wing's complement of 75 aircraft under CVW-2 completed 1,419 sorties totaling 2,874 flight hours during the exercise. This included flying 200 sorties over a two-day surge period and expending 251,768 pounds of ordnance on training targets ashore.

"We met our training objectives and combat effectiveness metrics. We benefited greatly from mentoring and insights shared by Carrier Strike Group 15 who served as our training partner," said Fuller. "We have already begun incorporating lessons learned."