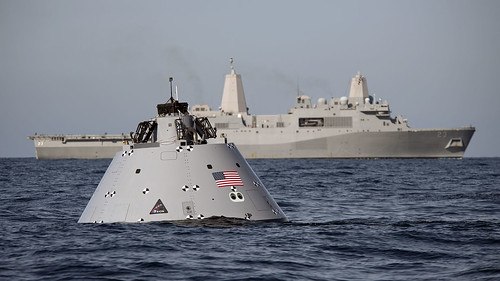 Underway Recovery Test-6 (URT-6) is part of a U.S. government interagency effort to safely retrieve the Orion crew module, which is capable of carrying humans into deep space.

This marks the fourth completion of a URT aboard Anchorage. NASA engineers worked alongside Sailors from the Anchorage, USS New Orleans (LPD 18), Special Boat Team 12, and Navy divers from Explosive Ordnance Disposal Mobile Unit 3 to test recovery operations of the Orion test article. Tests were conducted in varying sea states, during the day and at night.

"Our crew has actually been training for several months closely with NASA on everything from planning conferences to onsite training to be ready for the mission,” said Capt. Dennis Jacko, Anchorage's commanding officer. "I think the ship and the crew are doing a great job for a historic tasking we have added to a very busy schedule as we prepare for deployment. Everybody stepped up and provided the best support with our NASA partners for a very successful test."

With their main role of conducting amphibious operations, San Antonio-class ships have unique capabilities that make them an ideal partner to support NASA’s mission. One of the more important capabilities is the ship’s ability to recover the test capsule using the ship's well deck, which was designed to launch and recover amphibious craft. Anchorage also has the ability to carry and deploy multiple small boats to aid in the recovery process of the capsule and contains an advanced medical facility ideal for treating the returning astronauts.

URT-6 consisted of releasing the test capsule from the well deck, then carefully maneuvering the ship alongside the capsule at slow speed. Once the test article was far enough from the ship, the lines attaching the capsule to the ship were released. Then, divers attached a stabilization ring designed by NASA that would help in sustaining the astronauts in the capsule for up to three days. Divers then removed the collar, attached lines from the small boats to steady and guide the capsule toward Anchorage, where Rigid Hull Inflatable Boats (RHIB) would then assist in attaching lines from a NASA-designed winch which then hauled the capsule into the well deck.

The whole recovery is a high risk evolution, especially when the capsule is being towed closely behind the ship, but NASA took our inputs and modified the equipment for this URT mission," said Chief Petty Officer Beau Lontine, a Navy diver assigned to Explosive Ordnance Disposal Mobile Unit 3. "There are so many things that could go wrong if just one person isn't paying attention. We've conducted training with the hardware and rigging to allow for a safe recovery of the capsule. It might seem like a basic recovery, but it is far from a simple evolution."

The tests allowed NASA and the Navy to continue to demonstrate and evaluate the recovery processes, procedures, hardware and personnel in real, open-ocean environment before conducting actual recovery operations.

Also aboard Anchorage to observe the URT for the first time is NASA Astronaut Stephen Bowen, who is also a retired Navy captain.

“I’m very pleased with what I’ve seen so far,” said Bowen. “The reason you do this is to better understand. You realize you don’t have all the answers right now. There will be changes made; things are going to evolve, and they should get better over time.”

URTs have been conducted since 2014 and will continue to be until NASA engineers believe the recovery process is without error. The next URT, URT-7, is scheduled to be on the San Antonio-class amphibious transport dock USS Somerset (LPD 25) in October 2018 when NASA will conduct the validation and verification of the recovery hardware.

According to NASA's Recovery Director Melissa Jones, future tests will ensure NASA and the Navy arrive at a safe and more efficient way to recover the capsule for an early 2020’s mission involving a flying crew.

“Testing this week went very well,” said Jones. “We’ve actually shaved about 15 minutes off our timeline already with one run, which is important to us because when we recover crew, we have to get them out as quickly as possible.”

The Orion spacecraft is designed to meet the evolving needs of our nation's deep space exploration program for decades to come. It will serve as the exploration vehicle that will carry the crew to space, provide emergency abort capability, sustain the crew during the space travel and provide safe re-entry from deep space return velocities.

Anchorage is homeported in San Diego and is part of U.S. 3rd Fleet. Third Fleet leads naval forces in the Pacific and provides realistic, relevant training necessary for an effective global Navy. 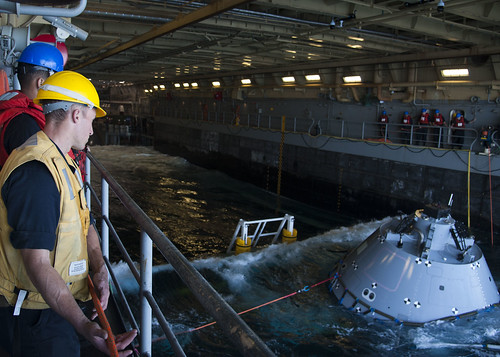 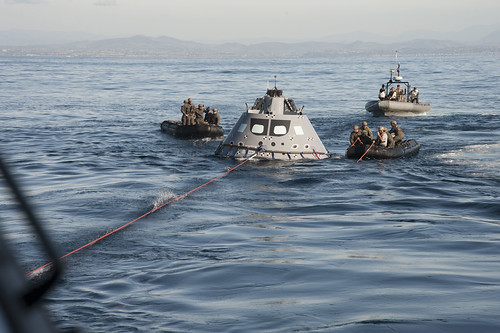