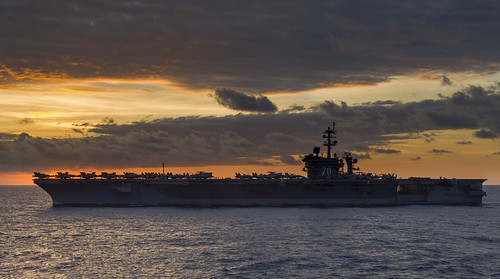 More than 5,500 Sailors from both vessels will visit local attractions and participate in community service projects while in the Philippine capital.

"We are just very thankful for the support we have from the Philippine government and the Philippine people," said Rear Adm. John Fuller. "We have a longstanding relationship and we want to continue to build on that."

The strike group is operating in the Indo-Pacific region to work with partners and allies, promote freedom of the seas, and enhance regional security. Carl Vinson is based in San Diego and Michael Murphy operates from Hawaii.

The delegation ate lunch with strike group leadership, toured the hangar bay, and observed flight operations on the flight deck prior to boarding a C-2A Greyhound for the return to Manila.

While visiting the sprawling city, some crew members will experience Philippine culture for the first time.

"The crew is looking forward to USS Michael Murphy's first ever port visit in the Philippines," said Cmdr. Kevin Louis, the ship's commanding officer. "We have a great schedule of tours and events for our Sailors to explore the culture and history of Manila."

This deployment marks the second time the Carl Vinson Strike Group is operating under U.S. 3rd Fleet's command and control. U.S. 3rd Fleet's control of ships and aircraft beyond the international dateline to India enables U.S. 3rd and 7th Fleet to operate together across a broad spectrum of maritime missions.