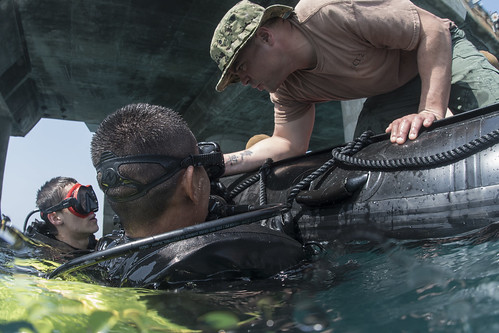 SATTAHIP, Thailand - Underwater construction teams from U.S. Navy, Royal Thai Navy and Republic of Korea Navy are operating together in Thung Prong Bay at Sattahip Navy Base in Thailand throughout the 37th annual exercise Cobra Gold, which ends Feb. 23.

The UCTs have been inspecting for deterioration of the Thrung Prong Pier, which was originally built in the 1970s and was rebuilt for the first time last year.

"The UCTs completely rebuilt Thrung Prong in 2017, in which they put 377 sacrificial anodes on the pier [used to protect submerged metal structures from corrosion], and we are here to measure the rate of deterioration on those anodes," said Ramirez. "Since the pier was built, it has been used for various purposes, ammo offloads, mooring, getting supplies on and off the base and basically enabling the Royal Thai Navy to be a little bit more efficient since it has been built."

The UCT members are also going to be preparing for a possible future rebuild of the DeLong Pier during Cobra Gold 18.

"The DeLong Pier was built in the 1960s," said Ramirez. "It's an ammo offload pier that the U.S forces built, and right now it is dilapidated, so we are here to make some measurements and create a possible demolition plan for a future project."

ROK Navy Lieutenant Donghyua Oh, from Jinhae Naval Base said that the Thai, ROK and U.S. UCT personnel working together strengthens the nation's alliances exponentially. This Cobra Gold and every other one moving forward will continue to grow and strengthen the UCT's ability to operate together.

UCTs are a small community in each nation's Navy, which is a reason why their ability to operate together and build lines of communication is part of Cobra Gold 18.