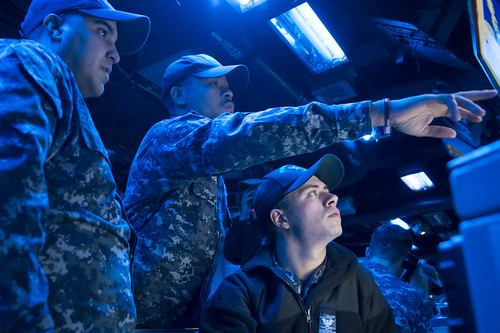 The certification involved multiple exercises that tested the combat systems capabilities of Bonhomme Richard while in port and at sea.

“The 2.4 certification event for Bonhomme Richard demonstrated their ability to run multi-mission warfare with an ARG (amphibious readiness group),” said Chief Operations Specialist Adam Smoller, the surface and air warfare team lead from the Afloat Training Group Western Pacific (ATG WESPAC) Detachment Sasebo. “The purpose of displaying these capabilities is so that they can go out and run essential missions, defend the ship, defend the ARG and defend the homeland from any threats that present themselves.”

“The certification process started at a basic phase,” said Senior Chief Operations Specialist Charles Myers, the combat systems training team (CSTT) coordinator of Bonhomme Richard. “We coordinated with the ATG in Sasebo and started it off by looking at our administrative process; making sure we have watch bills and qualified personnel. Once we had demonstrated that we have no deficiencies, we moved forward and checked our material condition, which is checking out our equipment and making sure it all functions properly.”

The administrative and material checks established the 2.1 phase. After completing the 2.1 phase, the crew moved on to the 2.2 phase, which focused on training. During this time, ATG worked with watch standers and operators to reinforce and enhance their individual and overall levels of knowledge.

“Prior to the synthetic phase, we had the chance to be trained in every type of warfare, for every watch station and for all our equipment,” said Myers. “After the training phase, we went into the 2.3 phase, or the synthetic phase, in which the CSTT members coordinated and demonstrated our ability to create effective combat scenarios to train our guys to be able to engage and defend the ship. We then entered 2.4 in which scenarios were sent to us from the fleet.”

The 2.4 phase was dependent on the watch standers’ abilities to successfully respond to various scenarios. The two final phases, 2.4 alpha and 2.4 bravo, consisted of live-fire demonstrations of crew-served and combat systems weapons, which resulted in successful firings from the ship’s Phalanx close-in weapons system (CIWS), 25 mm MK 38 machine gun systems, and the .50-caliber machine guns.

During the live-fire exercises, the ship’s small craft action team (SCAT), made up largely of Weapons department Sailors, was called on to support the certification’s surface warfare evaluation.

“Realistically, SCAT is one of the ship’s last lines of defense when it comes to small surface crafts,” said Gunner’s Mate 2nd Class Travis Waggoner, a .50-caliber machine gun mount captain. “If it comes down to it, these are the people who will protect the ship and stay ready-to-go at a moment’s notice.”

SCAT’s execution of the 2.4 alpha live-fire exercise took place when Sailors launched a naval surface gunnery balloon target, better known as a “killer tomato,” into the water, and SCAT members at responding gun mounts engaged the target, focusing on tactical expertise and communication.

“During the certification, we were required to be manned up in five minutes or less, as well as be able to accurately engage a target and relay information from the mount to the gun liaison officer. The gun liaison officer communicates straight to the OOD on the bridge who then communicates with the TAO (tactical action officer),” said Waggoner. “We train like we fight, and we scored 100 percent on the killer tomato engagement.”

“The crew was fantastic. Their motivation was top notch, one of the best I’ve ever seen,” said Smoller. “They displayed tireless dedication towards making sure their equipment is operational and fully capable to answer all of the bells [alarms].”

Effective communication was crucial to succeeding a certification in which the crew had to act as one to complete the different challenges of the certification, said Operations Specialist 2nd Class Andrei Brundige, a member of the ship’s CSTT.

“Knowing that our Sailors can respond to all kinds of different casualties is really important, especially when we’re deployed,” said Brundige. “It helps us sleep better at night knowing that there are people who are qualified and know what they are doing, and you can trust that we can protect the ship.”

Bonhomme Richard is operating in the Indo-Pacific region as part of a regularly scheduled patrol and provides a rapid-response capability in the event of a regional contingency or natural disaster.