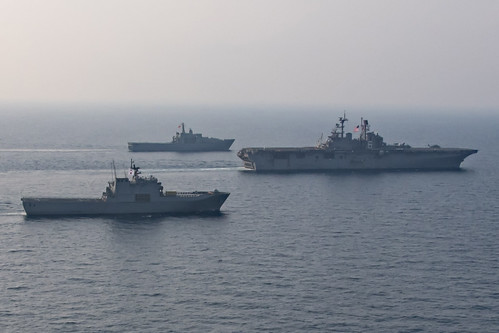 WASHINGTON - Some 5,800 U.S. service members, working in Thailand alongside forces from 29 partner nations, have wrapped up one of the largest security cooperation exercises in the Indo-Pacific region.

Pentagon spokesman Army Col. Rob Manning told reporters today that Cobra Gold 18, which ended Feb. 23, sought to improve participants’ capability to plan and conduct combined and joint operations, to build relationships among participating nations across the region, and to improve interoperability over a range of activities, including enhancing maritime security and responding to large-scale natural disasters.

In addition to U.S. forces, representatives from Indonesia, Japan, Malaysia, Singapore, Thailand, and South Korea synchronized efforts to overcome the challenges of the exercise.

The field training exercise included a massive combination of forces in air, ground and maritime operations. In an effort to maintain readiness and sustainment training requirements while emphasizing security cooperation between partner nations, participants launched operations responding to a simulated large-scale natural disaster in a foreign country, and they completed processes and procedures to evacuate affected civilians.

South Korean and U.S. reconnaissance Marines learned basic skills necessary to survive and thrive in a hot, dangerous environment from Royal Thai Marines, even learning to capture and kill a snake to drink its blood for hydration. They also learned how to identify local edible and inedible vegetation, how to locate water sources and techniques for building a fire with bamboo and trapping wild game.

“This exercise was an integral part of the U.S. commitment to strengthen engagement in the region,” Manning said.