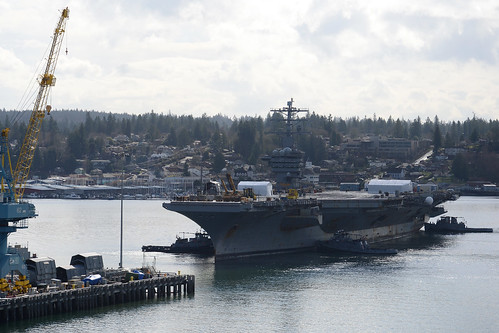 “I’ve seen this ship come full circle,” said Aviation Ordnanceman Jordan Manuel, from San Jose, Calif. “I got to the boat in the middle of Nimitz’s last maintenance availability so I got to experience all the work-ups and underway periods that led up to our previous deployment, and now we’re back in the yards getting ready for our next mission. I’ve experienced everything it takes to get an aircraft carrier back on deployment, and this is just a part of the process.”

Nimitz took part in multiple operations during the its last deployment. In June 2017, the ship participated in a series of bilateral training operations with the Royal New Zealand Navy to increase interoperability. Exercise Malabar 2017 took place in Chennai, India and the Bay of Bengal, which increased relations and maritime security between the U.S. Navy, Indian Navy and the Japan Maritime Self-Defense Force. They also took part in Operation Inherent Resolve, flying more than 1,000 combat sorties into Iraq and Syria, dropping more than 900 pieces of ordnance.

“It’s a different mission for these guys,” said Brian Fazio, the project superintendent. “This isn’t deployment, but it is depot level maintenance that requires attention to detail and a safety mindset.”

Although Nimitz is being moved from an operational to a maintenance status, the work for the crew does not stop.

“We still have to execute the same way we have been,” said Cmdr. Chuck Jones, Nimitz’s chief engineer. “This is still our home, and we have to take care of this ship and get it ready for the next deployment.”

Nimitz will receive upgrades and renovations to a variety of systems to include steering components, hull preservation, combat systems equipment, aircraft elevator doors, berthing areas and a new stern dock. This will be the ship’s most recent upgrade since it’s last maintenance period from January 2015 to October 2017.

“In all reality, this preservation period should be one of the last for Nimitz,” said Fazio. “With new counter measure systems and refurbishments to multiple areas of the ship including antennas; close-in weapons systems; rudders, shafts and propellers; habitability areas; and overall hull preservation, Nimitz should expect a busy preservation period.”

With a lengthy and high work tempo yard period ahead, the crew anticipates 15 ship’s force teams to split up 315,000 man hours to get the ship back in fighting condition and back out to sea.

“This crew performed extremely well since the ending of the last yard period,” said Nimitz Commanding Officer Capt. Kevin P. Lenox. “I have no doubt that this crew will efficiently and safely execute this DPIA period the same way they executed their last at-sea period.”

“This is nothing like deployment, but this is work all the same,” said Manuel. “This is the preparation it takes to get a ship through a deployment or combat operations safely, and effectively.”

Although some Sailors won’t be on board long enough to see this yard period all the way through, it’s going to take the work of everyone to get Nimitz back to operations.

“My time on Nimitz is coming to an end, and I won’t be here to see the ship come back out to sea, but just like any other cycle, Nimitz will continue to push and get through this availability,” said Manuel. “Just like a lot of things in the Navy, the beginning of the process feels daunting, but you always come out of it better and with more experience.”

Nimitz is slated to return to sea May 2019 to perform sea trials in preparation for future operations.