The Pacific Riptide — History Offers a Cautionary Glimpse of the Future 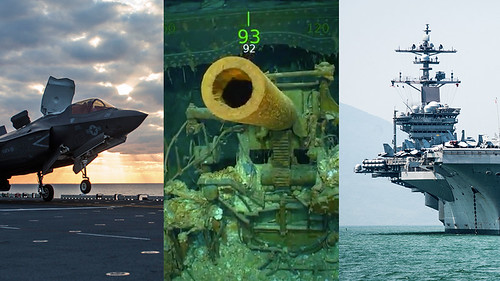 PEARL HARBOR - These opening days of March presented a confluence of events and milestones dripping with coincidence, irony and serendipity. That’s not lost on a superstitious lot like Sailors – especially when plotting our course. It’s a mariner’s habit to check your wake every now and again to get your bearings.

The Pacific theater encompasses 100 million square miles, nearly half the Earth’s surface, from Antarctica to the Arctic Circle and from the West Coast of the United States into the Indian Ocean. In earthly terms, the Pacific is vast. Our United States Navy has navigated these waters for centuries now, and her service here has peppered America’s heritage in places like Pearl Harbor, Midway, Guadalcanal, and Iwo Jima.

The naval service and the men and women who constituted it were here in these waters when rising powers’ appetites ballooned from aggressive to belligerent. And we stood resolute to purchase their defeat and secure stability and fairness for all in the wake of the devastation.

The widely acclaimed at-sea discovery of the USS Lexington (CV-2) last week was big – literally. The Lexington, an aircraft carrier sunk nearly 76 years ago by the Japanese in the Battle of the Coral Sea gave her all in repelling a Japanese invasion force determined on securing Port Moresby in what is now Papua New Guinea. Before surrendering to the sea on May 8th, 1942, ‘Lady Lex’ also made a dent in the Japanese naval forces that the U.S. Navy would successfully ambush at Midway one month later.

As international media beamed video of the once-proud ship’s guns and aircraft some three thousand meters deep in the Coral Sea roughly 500 miles off Australia, the son of a USS Lexington survivor and current U.S. Pacific Command Commander Admiral Harry Harris was in New Zealand dedicating a war memorial there. Harris, who previously served as the Commander of the U.S. Pacific Fleet and is nominated to be the next U.S. Ambassador to Australia, said upon hearing the news of the discovery “Our Navy’s strength comes from those who have gone before… This is who we are. No one should doubt that today’s warriors are ready to fight tonight and win.”

Joining him at the dedication event were U.S. Ambassador to New Zealand and Samoa Scott Brown, and the New Zealand Minister of Defense, the Honorable Ron Mark. Brown spoke about the 150,000 American servicemen and women came to New Zealand during WWII to prepare for battles in the Pacific and described this period as the bedrock of today’s enduring relationship.

Meanwhile, in Tokyo, Japan’s Minister of Defense Itsunori Onodera was honoring the Commander of the U.S. Pacific Fleet, Adm. Scott Swift in Tokyo by presenting him the Grand Cordon of the Order of the Rising Sun. Humbled, Swift indicated “… the longstanding alliance with Japan draws strength from shared principles and those shared principles help us to more effectively respond to shared challenges in the Pacific. Our bonds are tighter than ever…”

At sea, a detachment of F-35B Lightning IIs assigned to Fighter Attack Squadron 121 (VMFA-121) arrived aboard the amphibious assault ship USS Wasp (LHD 1), marking the first time the aircraft has deployed aboard a U.S. Navy ship and with a Marine Expeditionary Unit in the Indo-Pacific. This development is a game-changer in naval aviation.

At the same time in Da Nang, Vietnam, the USS Carl Vinson (CVN 70) arrived for a port call, marking the first time a U.S. aircraft carrier has visited the country in more than 40 years.

On the surface, America’s continued investments in its partnerships, innovation, presence, heritage and combat readiness might reassure citizens and allies alike.

But there’s a not-so-subtle and insidious undercurrent. China is and has been undertaking increasingly aggressive militaristic, economic and political actions to erode the framework of stability and security that has allowed prosperity to flourish for all nations here for more than 70 years.

They have constructed and militarized islands. They are gaining toe-holds in air and sea ports around the region and around the globe. They are increasingly and unapologetically challenging established and enduring international norms, standards, rules and laws and they exert excessive territorial claims in Pacific waters that have been open for generations.

China is tilting the global landscape and appears to be slowly strangling the means by which fairness might exist for nations everywhere.

The U.S. National Defense Strategy summary explicitly states China is now undermining the international order from within the system by exploiting its benefits, while simultaneously undercutting its principles and “rules of the road.”

The eerie images from the bottom of the Coral Sea last week should serve as a reminder that turning away from the international rules-based order has its costs. The U.S. Navy and her Sailors have demonstrated they’ll give whatever it takes to sustain fairness and stability. The undertow of Chinese coercion and intimidation, however, threatens to cast adrift the security, stability and prosperity that all countries in the region have enjoyed since the end of WWII.

This challenge requires the attention of all who have a stake in the stability of the Pacific. Otherwise, we’re sailing in waters we haven’t seen since before Dec. 7, 1941.

There’s a storm brewing. If the tide doesn’t turn or we don’t alter our collective course, our nation and the world should understand the cost of a return of “might makes right” as a ruleset for international competition. They can get a fresh look at it from the bottom of the Coral Sea.

This commentary was originally published on the official blog of the Naval History and Heritage Command.