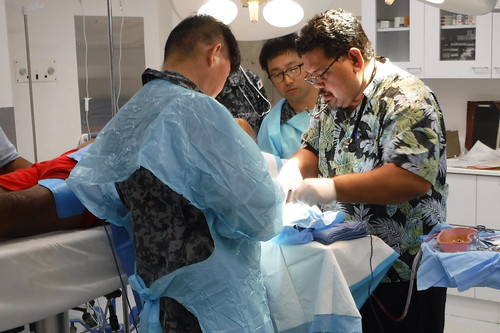 YAP, Federated States of Micronesia - Two medical staff officers from the Japan Air Self-Defense Force and a medical assistant from the British Army helped a Yapese patient who experienced a medical emergency during Pacific Partnership 2018, March 23 .

“We immediately rushed him to the surgical room and onto the operating table to stop the bleeding as soon as possible,” said Matsuura. “The surgical procedure took nearly two hours with eight stiches and a lot of gauze.”

The 67-year-old patient arrived with two tourniquets on his arm while bleeding from his wrist. That morning, while cleaning around his home, the knife used to clear out overgrown branches broke and struck his wrist causing fatal blood loss if not treated in time.

“We are trained constantly to respond to trauma situations,” said Phillips. “We saw a patient needing immediate attention, and we acted quickly and efficiently. This is what we do.”

“It is a great experience to be part of a multinational team working together to help people from all over Yap,” said Phillips. “We provided medical care to over 100 patients at the hospital, and we are looking forward to continuing during the rest of the exercise.”

Throughout the procedure, two nurses and a doctor from the hospital provided continual support to the operating medical staff including intravenous equipment and liquids, morphine and tourniquets.

“It definitely was nerve-wracking initially,” said Maejima. “But we supported each other during the entire procedure and in the end, we were able to learn from each other and make a meaningful impact.”

The U.S. and the Federated States of Micronesia continue a long history of friendship, having participated in the Pacific Partnership mission as host nation for five years with many Micronesia men and women having served or currently serving in the U.S. armed forces.

Since 2006, 22 partner nations around the globe in 18 host nations have participated in Pacific Partnership providing medical care to more than 300,000 patients, veterinary services to nearly 40,000 animals and completed nearly 200 engineering projects while building meaningful and close partnerships throughout the region.