From Department of Defense 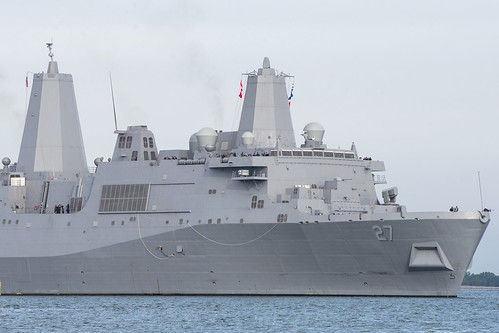 WASHINGTON - The Navy will commission its newest amphibious transport dock, the future USS Portland (LPD 27), during a 10 a.m. PDT ceremony Saturday, April 21, at the Port of Portland, Marine Terminal 2 in Portland, Oregon.

Deputy Secretary of Defense Patrick M. Shanahan will deliver the ceremony's principal address. Bonnie Amos, wife of the 35th Commandant of the Marine Corps, retired Gen. James F. Amos, serves as the ship's sponsor. In a time-honored Navy tradition, she will give the order to "man our ship and bring her to life!"

"USS Portland enters service in a period of dynamic security challenges, and I am confident this ship and crew will conquer these and future challenges because of the strength and talent of the Sailors and Marines who will serve aboard this ship," said Secretary of the Navy Richard V. Spencer. "I am certain that USS Portland will proudly represent both the United States and the people of Portland in maritime operations around the world for decades to come."

USS Portland (LPD 27) is the second ship to honor Oregon's largest city and is the third U.S. Navy ship to bear the name Portland. The first ship was heavy cruiser USS Portland (CA 33), named for the city in Maine, which was commissioned Feb. 23, 1933. Serving throughout World War II, she saw action at a number of important battles, including Guadalcanal, Leyte Gulf, Corregidor and Okinawa. The second ship, dock landing ship USS Portland (LSD 37), named for the cities of the same name in Maine and Oregon, was commissioned Oct. 3, 1970. Over the course of nearly 33 years of service, she participated in a number of important operations, including the 1976 evacuation of American citizens from Lebanon, the 1983 multi-national peacekeeping mission to Beirut, Lebanon, and deployment of Marines to Kuwait in support of Operation Iraqi Freedom.

The future Portland is the 11th San Antonio-class ship. These ships are designed to support embarking, transporting, and landing elements of more than 800 Marines with both a flight deck, which accommodates CH-53E Sea Stallion, CH-46/SH-60 helicopters and MV-22 Osprey tilt-rotor aircraft, and a well deck, which can launch and recover landing craft and amphibious vehicles.

The ceremony can be viewed on the Navy Live blog at http://navylive.dodlive.mil.